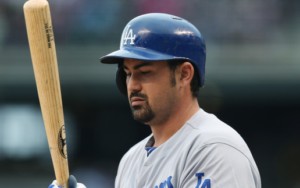 After the Los Angeles Dodgers suffered what can only be described as an unfair amount of injuries during the 2016 season, the team already has its first injury of 2017 less than a week into spring training. Fortunately, this one doesn’t appear to be too serious. First baseman Adrian Gonzalez will be sidelined for at least two weeks due to tendinitis in his right (non-throwing) elbow. Gonzalez has been quick to brush off the injury as something minor.

“It’s tennis elbow from just working out, too much hitting and boxing,” the 34-year old first baseman explained to reporters Friday. “I felt it while working out in early December and it didn’t seem like much, but it hasn’t gone away. They told me to take a few weeks off so it won’t linger and flare up and bother me going into the season. It’s precautionary. Better to take care of it now than six weeks from now.”

Gonzalez says that sparring is part of his usual offseason routine, but that this is the first time it’s caused pain like this in his elbow. In addition to experiencing pain while swinging the bat, Gonzalez says there is discomfort when he squeezes his glove. As a result, the elbow injury could keep him out of almost all baseball activities for the next two weeks.

“It’s tough to put it like this, but it’s being punished for working too hard,” Gonzalez said of the injury. “You work so hard in the offseason to get ready, and then your body says, ‘You worked too hard.'”

At this point, Gonzalez doesn’t believe the injury will affect his availability for opening day. However, it could keep him out of the World Baseball Classic next month. Gonzalez is currently planning to play for team Mexico, which is being managed by his brother, Edgar. Gonzalez isn’t sure if he’ll be ready to face live pitching by the time the team comes together to begin preparing for the tournament.

For the Dodgers, the next two weeks may be a way to prepare just in case they lose Gonzalez during the regular season. Of course, Gonzalez has played in at least 156 games every year since 2006, as few players have kept themselves in better shape and avoided the injury bug better than Gonzalez over the last decade. Ironically, one possible option at first base, Darin Ruf, was reportedly sold to a Korean team earlier in the day.

Rob Segedin is the only other first baseman the Dodgers have on their 40-man roster. However, he has just 73 career major league at bats. Scott Van Slyke may be a more likely backup, although he’s primarily an outfielder and has just 25 career starts at first base. The Dodgers also signed Ike Davis to a minor league deal, although he had just 14 major league at bats last season and may only get a chance if Gonzalez were to suffer a long-term injury.

Right now, Gonzalez doesn’t appear to be worried, as doctors have told him the injury should respond positivity to two or three weeks of rest. Of course, Gonzalez has never experienced an injury to that elbow before, and he’s no spring chicken, so there’s always a chance his recovery doesn’t go according to plan. In the meantime, the Dodgers will take a look at their other first base options, just in case they need one of them at some point in 2017.