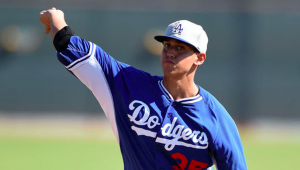 The Los Angeles Dodgers continue to look deep into their farm system in order to compensate for the almost unimaginable amount of injuries to starting pitchers the team has suffered this season. Those injuries will lead the team to promote Jose De Leon to make his big league debut on Sunday against the San Diego Padres. De Leon is rated the team’s second best prospect by MLB.com and the 35th best prospect in all of baseball.

The Dodgers are in the midst of a stretch in which they are sending seven different starting pitchers to the mound in seven games, including De Leon’s scheduled start on Sunday. The extra starters are designed to help give Kenta Maeda more rest in between starts heading into the playoffs. Rich Hill was also skipped earlier in the week due to a blister, although he’s scheduled to start Saturday. Of those seven starters, five of them are rookies, including De Leon, who will become the 15th different starting pitcher the Dodgers use this season.

De Leon got a late start to his 2016 season due to an ankle injury, and he missed time in May due to shoulder trouble. However, in 16 starts at triple-A this season, De Leon is 7-1 with a 2.61 ERA. He has 111 strikeouts in 86.1 innings of work. Opposing hitters are batting .194 against him, an impressive accomplishment in the hitter-friendly Pacific Coast League.

De Leon was not a highly-rated prospect when the Dodgers originally drafted him in the 24th round of the 2013 draft. But he enjoyed a breakout season in 2014 and has been moving quickly through the Los Angeles farm system ever since. Over the last three years, De Leon has added velocity to his fastball and developed an excellent changeup, a pitch the 24-year old rarely used while in college.

“I haven’t seen a lot, but I know he’s got a very good fastball, he’s got a plus change, and he’s got a breaking ball to go along with his mix,” Dodgers manager Dave Roberts said, giving a scouting report on De Leon. “What I do know about Jose is he’s a great young man, he’s a hard worker, and he’s got a lot of character. And he’s from Puerto Rico. I’m anxious to learn a little bit more about him.”

How De Leon will be used after Sunday’s start remains to be seen, as the Dodgers are hoping to get some of their injured pitchers back in the near future, most notably Clayton Kershaw. The likes of Kershaw and Scott Kazmir could soon be added to the contingent of seven starters getting a turn this time through the rotation.

However, if De Leon pitches well, the Dodgers may be able to find room for him in the rotation, particularly with the desire to rest Maeda heading into the postseason and limit the innings of fellow rookie Julio Urias. Even if De Leon struggles in his big league debut, the Dodgers may be able to use him out of the bullpen down the stretch, and possibly in the postseason.