"Mr. Price has been given the "Billy Walters treatment" by the betting establishments in the Las Vegas area, due to his distinct ability to pick winners and cost casinos millions."
Home
Baseball
Dodgers Send Scott Kazmir, Brett Anderson to DL; Tie Record for Players on DL 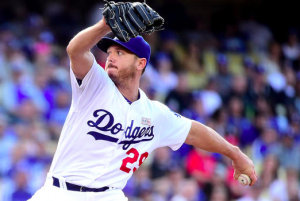 The 2016 season for the Los Angeles Dodgers has in large part been defined by injuries, and now they have the record to prove it. The Dodgers placed starting pitchers Scott Kazmir and Brett Anderson on the 15-day DL Tuesday night, and with it they tied the major league record for the most players placed on the DL in a single season with 27.

Kazmir started on Monday against the Cincinnati Reds but lasted just 2.2 innings, allowing four runs on six hits. He is being placed on the DL with neck inflammation. Meanwhile, Anderson has made just two starts this season after beginning the season on the DL. After returning earlier this month he is already back on the shelf due to a blister on his finger. The pair joins Clayton Kershaw, Rich Hill, Hyin-Jin Ryu, Alex Wood, and Brandon McCarthy as Dodgers starting pitchers on the DL.

The silver lining is that Hill is finally poised to make his Dodgers debut on Wednesday, more than three weeks after the Dodgers traded for him. Assuming he’s finally able to join the Los Angeles rotation, he will fill one of the spots vacated by Kazmir and Anderson, while Ross Stripling is expected to fill the other, as the Dodgers have penciled him to start in Anderson’s place on Thursday.

Of course, the Dodgers may soon have to fill the rotation spot of Julio Urias. The 20-year old rookie is finally starting to turn a corner, throwing six shutout innings against the Reds on Sunday. However, the Dodgers are starting to have concerns about the number of innings he has pitched this year. He would be inline to start again on Friday, but the team is still debating whether he’ll make that start. If he doesn’t, it could open the door for Jose De Leon, one of the team’s top prospects, to make his big league debut.

Unfortunately, outside of Hill, none of the injured Dodgers starters are expected to come off the DL and rejoin the rotation any time soon. Kershaw may be the closest after throwing a bullpen session on Tuesday and reporting no issues afterwards. However, there is still no timetable for his return.

Of course, despite all the injuries the Dodgers have somehow persevered and actually taken over first place in the NL West from the San Francisco Giants, who have been one of the worst teams in baseball since the all-star break. After beating the Giants on Tuesday, the Dodgers now have two game lead over the slumping Giants, who still hold the top wild card spot in the National League.

It’s been amazing to see the Dodgers not only survive this many injuries, particularly the injuries to starting pitchers, but also surpass San Francisco in the standings and move into first place. However, other than Hill, the calvary is not coming back any time soon, and with Kazmir, Anderson, and possibly Urias all leaving the rotation, the Dodgers pitching depth will continue to be challenged. We’ll see if it can continue to hold up.