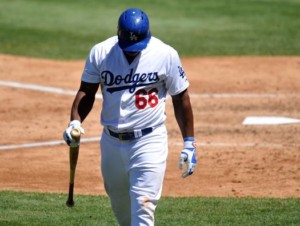 According to reports, the Los Angeles Dodgers plan to recall enigmatic outfielder Yasiel Puig from triple-A on Friday. There has been a great deal of talk and speculation regarding the future of the Cuban right fielder in recent days, but the Dodgers have decided to bring him up to spend September in the big leagues. The move, at least in theory, will allow Puig to earn a spot on the Dodgers postseason roster should Los Angeles be able to secure a playoff spot over the next month.

Earlier this week, reports surfaced that the Dodgers had placed Puig on revocable waivers and that at least one team claimed him. However, the Dodgers and that mystery team were unable to work out a trade, prompting Los Angeles to pull Puig off waivers. The Dodgers were reportedly only interested in trading Puig if they could receive a major league player capable of helping them down the stretch and in the postseason. Meanwhile, the team may have just been trying to block Puig from going to a competitor.

The Dodgers are likely to revisit trading Puig this winter when they don’t have to pass him through waivers. Reports indicate that at least three teams made an effort to claim Puig, indicating that there should be a market for him this winter. After this season, Puig will have two years and $14 million left on his contract, which is a more than reasonable contact for a player with his abilities, even if he’s been a disappointment for the better part of two seasons.

During his 19-game stint in triple-A, Puig hit .348 with eight extra-base hits, including four home runs, giving him an impressive OPS of .994. Puig also gave a candid interview earlier this week in which he spoke about how his time in the minors has helped him grow.

It remains to be seen how much playing time the Dodgers will give Puig, who was sent to the minors one day after the team acquired right fielder Josh Reddick at the start of August. However, Reddick is hitting just .161 in 25 games since joining the Dodgers, which could open the door for Puig to get an opportunity to play with regularity instead of just serving as depth on the Los Angeles bench. If nothing else, Puig could get a chance to spell Reddick against left-handed starters, affording him the opportunity to prove he belongs to be on the Dodgers postseason roster.

In terms of his time with the Dodgers, this figures to be Puig’s last stand. The team appears set on moving on from him this winter, which is why the fact that he’s getting a September call-up is a little surprising. Nevertheless, Puig is getting the opportunity the spend September in the big leagues. Now we just have to see if he’ll do anything with it.