Don’t Give Up On The Tennessee Volunteers Just Yet

One of the worst things in sports, college or professional, is hype. Whether it comes from fans on social media, bloggers, journalists, or talk shows doesn’t matter. When so many people talk about how good you are or how good they think you will be it is hard not to listen. Not just for the players, but for fans that do not follow the team closely as well.

The hype was pretty strong for the Tennessee Volunteers coming into the 2016 college football season. For the first time in years, the Volunteers are a top-10 preseason pick in the AP (No. 9) and Coaches (No. 10) Polls–and they were expected to stay there! 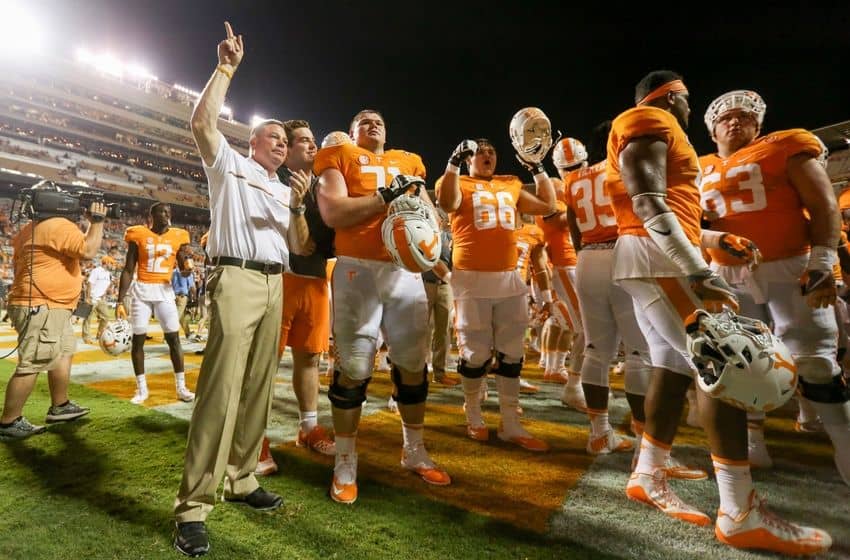 With 17 starters returning, a potential Heisman candidate in quarterback Joshua Dobbs, and a defense featuring three potential first round draft picks it is not hard to see why so many thought so highly of the Volunteers heading into Thursday night’s opener against Appalachian State.

Then they played Appalachian State.

Tennessee was expected to run rough-shod over the Mountaineers. Vegas pegged the Volunteers as a three-touchdown favorite in the game. Appalachian State ended up leading for the majority of the game and had a chance to take a late lead, but missed a 42-yard field goal.

The game ended up going to overtime where Tennessee won thanks to a fumble recovered in the end zone for the decisive touchdown in a 20-13 win in overtime.

Frustrating? For Volunteers fans and the many who were pushing the narrative that this could be Tennessee’s year—absolutely. But not for head coach Butch Jones (USAToday):

“I’ve never been part of a frustrating win. A win is a win,” said Tennessee coach Butch Jones. “Did we do some things that were uncharacteristic? Absolutely. I can guarantee you this, we will get them corrected. I think there’s a lot of great teaching points that came about that we have to get corrected. Again, we found a way to win.”

They did get what matters in the end, but with the level of difficulty involved in getting it, many have jumped ship from the Volunteers Hype Train. A little less attention would not be a bad thing, and there is an excellent chance many of the critics will jump back on the bandwagon before the season ends.

The critics are forgetting the golden rule of football—any team can win on any given day. Ask anyone that has played football beyond high school and they will likely be able to remember at least one game where their team was the heavy favorite, and they lost (or barely won). It’s a fact of life for football players—sometimes the team that wants more is the one that wins.

Why doesn’t the team that should win not want it? They do, but for any of a number of reasons the favored team could be looking past the team they are playing. As a result, they could either be not as prepared as they should be or simply not ready. If they are lucky, they will wake up and play up to their ability before the game ends—and before it’s too late.

Massive underdogs win games all the time, but when the season ends—if the team truly was talented—it will be just fine. In 2007, when Appalachian State beat Michigan in the first game of the season, the Wolverines went on to finish 9-4, ranked No. 18 in the nation (AP Poll; No. 19 in Coaches Poll), and beat No. 9 Florida in the Capital One Bowl. Ohio State lost to an average Virginia Tech team in 2014 and still went on to win the National Championship. No. 13 Virginia Tech lost to James Madison in the second game of the 2010 season and still finished the year ranked in the top 20.

One bad game does not a dud make. Joshua Dobbs will play better as will the rest of the Volunteers in the weeks to come.

The easy thing to do would be to jump off the bandwagon. Tennessee has been pretty bad in recent years. So why should this one be any different?

Because it is–so jump off the bandwagon at your own risk.