When the Philadelphia Eagles announced they were trading Sam Bradford to Minnesota and elevating rookie Carson Wentz from third string to starter, the Eagles appeared to be throwing in the towel. Get rid of your veteran quarterback after the preseason ends and elevate your rookie who had been injured in his first preseason game and unable to practice the last few weeks? Were they crazy?

Crazy? Not really. It was hard to blame them for making the trade. It was a chance to get out from under an expensive contract, and a first and fourth round pick were more than they could hope to get for a 28-year old quarterback with serious injury issues otherwise. 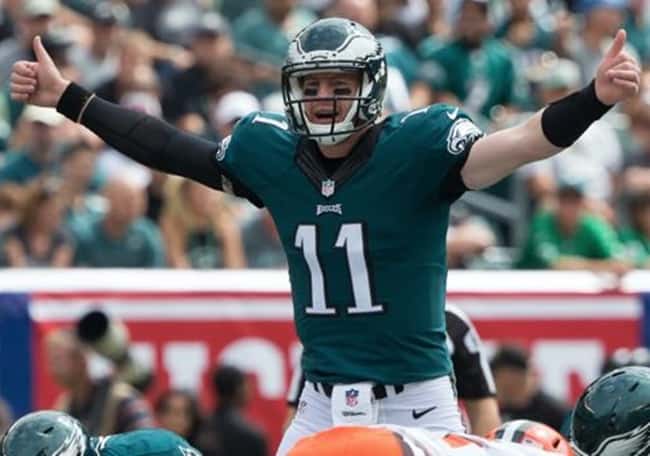 But that meant starting the rookie they traded up to take in the last draft, Carson Wentz. If he was a veteran quarterback, missing the preseason would be no big deal. But he was a guy they had planned on having inactive on Game Day. They said he needed to work on his mechanics before throwing him to the wolves.

They decided to go ahead and start him and tried to justify the move by talking about how smart he is (among other things). Three weeks into the season and it appears the Eagles front office is staffed by geniuses. Wentz has yet to throw an interception and is one of seven quarterbacks in the NFL that has a passer rating over 100.

Oh—and the team is on top of the NFC East with an undefeated record (3-0). So is it safe to believe Carson Wentz is the real deal, and the Eagles are contenders?

Wentz has looked good, but you can’t get much softer than his first two opponents and still be talking about an NFL team. The Cleveland Browns and Chicago Bears are terrible teams that can make almost anyone look like an All-Pro.

But then came Week Three and his first real test against the Pittsburgh Steelers defense—and he tore them apart. Wentz looked as calm, cool, and collected against the Steelers defense as he did against the Bears and Browns, and the results were even better. He completed more passes (23 of 31), had his first 300+ yard passing day (301), and added two more touchdown passes to his collection without throwing an interception.

So why isn’t it safe to get behind Wentz just yet? While the Steelers have a reputation for tough defensive play, the current unit pales in comparison to what the team is known for putting on the field. Last season they were one of the worst against the pass (No. 30) and still are this season (No. 31). The run defense appears to be pretty tough (5th last season; 4th so far this season), but why would anyone run the ball when it is so easy to pass?

Holding the Browns and Bears to less than 15 points a game is not that impressive, but holding a Steelers offense that averaged 21.7 points last season and had scored an average of 31 points the first two weeks to just three points—now that’s impressive.

When you have a defense that is keeping the opposing offense at bay as well as Philly’s is, it’s no wonder Wentz is as calm, cool, and collected as he is. He knows that if he screws up, the defense will be able to mitigate the damage.

In this day and age, fans want to know who the next superstar is going to be before he’s ready to be it. Will Wentz be one? Someday. Maybe he will be one this year, but until he faces a real challenge, it will be impossible to tell.