Don’t Look Now But The Indiana Pacers Have Reloaded! 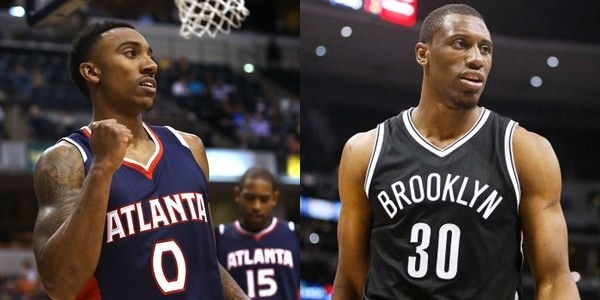 It wasn’t that long ago that the Indiana Pacers were the toast of the Eastern Conference; the only team that came close to challenging the LeBron James-led Miami Heat. But then Paul George broke his leg playing for Team USA, and they had to figure out how to remain competitive without him.

Now that they have him back they need to figure out how to rise above once again to take down LeBron’s Cavaliers. Last season’s roster clearly wasn’t good enough. So Larry Bird set out to make a few changes in the off-season.

The first came a couple of days before the draft and brought the team a much-needed point guard in Jeff Teague. Atlanta sent Teague to the Pacers, who sent George Hill to the Utah Jazz, who sent the No. 12 pick in the draft to the Hawks (which they selected Baylor forward Taurean Prince with).

With the trade, Monta Ellis can go back to playing shooting guard and leave the point guard work to Teague, an Indianapolis native. Now that the backcourt is set, the team must look to draft a forward, right?

Or maybe they trade for one instead.

Before the draft, the Pacers sent the No. 20 pick (and a protected second round pick) to the Brooklyn Nets for Thaddeus Young. The 28-year old has three more years on his contract and was one of the few talented players the Nets had. He should be a good complement to Paul George next season as he shares time with Myles Turner.

The move is not going to be official until July when the new league year begins. The Nets ended up taking Michigan guard Caris LeVert with the pick.

Young is not a flashy addition, but he fills a need for the Pacers. He is a talented, versatile, athletic player that will help the team become more mobile next season—and he doesn’t cost a fortune either (he’ll make $14.1, $14.7, and $13.7 million over the next three seasons).

The moves come on the heels of Pacers president Larry Bird having the team part ways with head coach Frank Vogel and promote Nate McMillan. However, while both should fit in well in McMillan’s offense, neither is known for being especially tough on defense.

But if you score enough the quality of your defense doesn’t matter a whole lot.

After making it to the conference finals for two years in a row, the Pacers missed the playoffs during the 2014-15 season without Paul George in the lineup. This past season they improved from 38 wins the previous year to 45, good enough to earn the seventh seed. They lost in the first round to the Toronto Raptors in seven games.

With Teague and Young in the lineup, the expectations will certainly be a lot higher for the Pacers heading into the 2016-17 season. Many experts and journalists are speculating that the team may not be done making moves just yet.

Well—they could use a better center. It is hard to see them signing Dwight Howard or resigning Roy Hibbert, but Al Jefferson and Joakim Noah will be on the market.