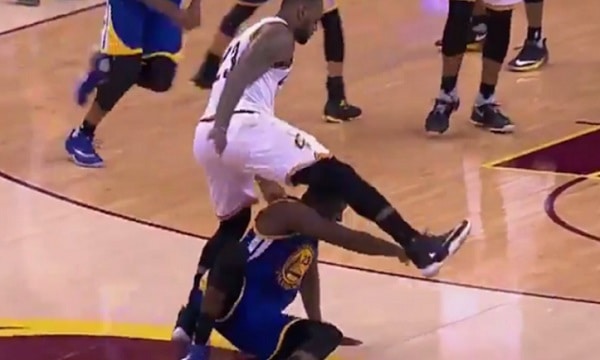 Demand for NBA Finals tickets is always high. When the home team has a chance to close out the series—like the Golden State Warriors do Monday night—the demand can drive prices to ridiculous heights. According to ESPN reporter Darren Rovell, three fans spent $17,000 a piece on courtside tickets for Monday night.

Now that Draymond Green has been suspended you have to wonder if they regret spending so much on seats.

Towards the end of Game Four, Draymond Green was knocked to the ground by LeBron James. As James stepped over Green, he was tagged in the family jewels by Green. A short scuffle ensued, and both players ended up getting hit with fouls.

After the game, LeBron James stated he thought the league should look into the incident. Sure enough—the league did.

And now Draymond Green has been suspended for Game Five. The last player to be suspended during the NBA Finals was Jerry Stackhouse in 2006.

Public opinion has gone two ways about the whole mess: serves Green right for hitting guys in the nuts as much as he does and that the NBA is trying to make it easier for LeBron James to win.

Many agree with the opinion expressed by Charles Barkley during a recent radio appearance for Bleacher Report’s SiriusXM station:

“When a guy steps over you, you have a moral obligation to punch him in the balls. Because that’s really disrespectful to step over a guy. You’re supposed to pop him in his junk if he steps over you like that.”

When asked about it, James offered a pretty poor excuse:

If he really wanted to get back in the play, he could have done so a lot quicker had he taken a slight step to the left or right and easily gone around Green. Instead, he awkwardly steps over him.

Hmmm…with his team down by ten with less than three minutes to go could LeBron have been trying to bait Green with hopes of getting him to retaliate?

It is possible, but we’ll never know. James is not dumb enough to admit doing something like that.

The foul is the fourth flagrant that has been assessed against Green during the postseason, which carries a one-game penalty.

As could be expected, the Warriors circled the wagons:

“I don’t know what LeBron’s intention was, you have to ask him,” Steph Curry said according to ESPN. “Obviously, Draymond thought it was disrespectful and wanted to get up and say something, so that was his reaction to it. I would have probably done the same thing.”

The Cavaliers didn’t comment on LeBron’s intentions, but instead chose to point the finger at Green for comments he made:

“There’re some things you can’t say to another man,” J.R. Smith said. “But some people don’t live by that code.”

Green will not be allowed in the Arena Monday night during the game. He leads the team in rebounds, assists, and steals during the Finals. With 315 points, 203 rebounds, and 123 assists in the regular season, he became only the seventh players to post 300+ points, 200+ rebounds, and 100+ assists.

His presence will certainly be missed, but the Warriors have already proven they have a deadly bench that is capable of putting up some serious numbers.

So—will it matter? Fans will find out Monday night.