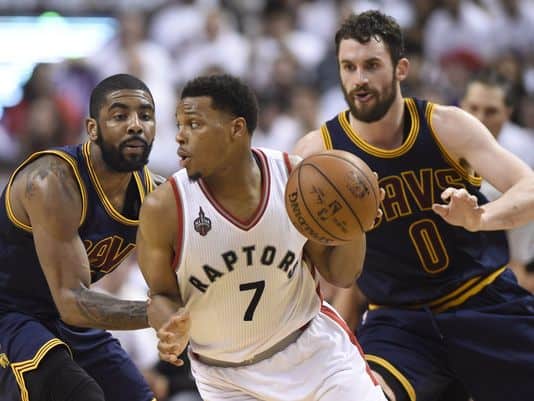 The Toronto Raptors have not been getting a lot of credit for being as good. They have not looked the part in the first two games of the Eastern Conference Finals but, to be fair, they are not playing the Philadelphia 76ers. There is a reason why the Cleveland Cavaliers are playing in the conference finals and the favorite in the series.

LeBron and company are not half bad either. Most of the experts have picked them to win the East and their former coach, David Blatt, has stated he sees them as the team to beat.

However, every so often, even if it is just one game, the mighty do fall. Saturday night the Raptors forced the Cavaliers to do just that with a 99-84 victory at home.

“It’s a long series,” Raptors coach Dwane Casey said after the game. “It’s not over with yet, but everybody thought we were going to get swept. I think that fuels us and if that’s what it takes, so be it.”

After getting destroyed in Games One and Two the Raptors needed to try something different—and they did. They focused more on keeping the Cavaliers from getting to the basket, something they had little trouble doing in Game One and Two.

The change in defensive philosophy meant the Cavs were going to get a lot of open looks from three-point range. Since they were red-hot from behind the arc against Atlanta, the Cavs probably didn’t mind. They saw the open shots and took them—but didn’t make nearly enough.

After making only 14 in Game One and Two, they made 14 in Game Three but needed 41 shots. All the misses turned into a lot of fast break opportunities for Toronto. Since the Raptors made 12 of their 31 three-point attempts it did not give them much of an advantage on the scoreboard.

“We didn’t play our game, and they made us pay for it,” LeBron James told the media. “We didn’t start the game as physical as we should have at the point of attack.”

An improved defensive effort would have meant little if Toronto’s stars didn’t come to play—and they did. Cleveland made DeMar DeRozan work hard for his points by contesting almost every shot he attempted (22 of 24), but he still led all scorers with 32 points on the night. Kyle Lowry battled foul trouble but still had a decent night with 20 points (7-13 from the floor including 4-8 from three-point range).

The real story, however, was Bismack Biyombo. He only contributed seven points but was a force to be reckoned with on the boards. Along with keeping the Cavaliers from making it to the hoop, he dominated the glass with 26 total rebounds (18 defensive and eight offensive).

“He reminds me of a guy like [Dennis] Rodman going for the rebounds,” Casey said. “He knows where the ball is coming off, he has a sense of where it’s coming off, and he does a good job doing that.

While the experts expect the Cavaliers to win the series, most of them did not expect the Raptors to be swept. Cleveland may be the better team, but even the best teams get beat once when a talented but inferior one has a better game plan.

The question now will be whether the Raptors can pull off the upset again. From comments LeBron James and Tyron Lue have made, it sounds like the Cavaliers are going to have a different game plan going into Game Four.

Will the Raptors be able to counter or will it be another blowout? Fans will have to wait until Monday night to find out.