Eastern Conference Finals Game Two Recap: Toronto Is Who We Thought They Were 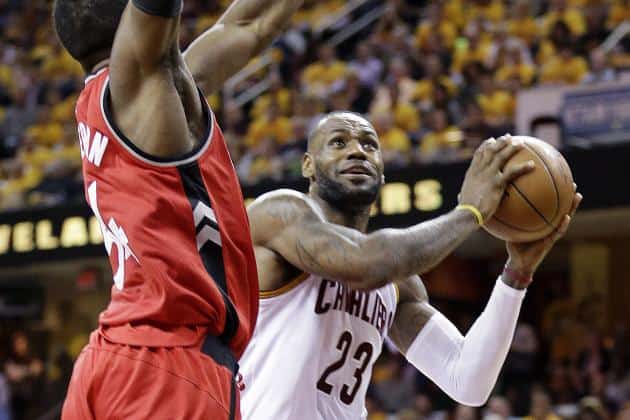 Lebron and the Cavs cruise to Game 2 victory.

Heading into Game Two of the Eastern Conference Finals in Cleveland Thursday night, the Toronto Raptors knew they had to do a few things differently. They knew they had to make a few more shots while somehow keeping the Cleveland Cavaliers from making as many as they did in Game One.It didn’t work.

The scenario looked a lot like Game One. Toronto kept it close in the first period but couldn’t keep up in the second. Going into the half, the Cavaliers held a 62-48 lead and went on to win by 19, 108-89.

With the win, the Cavaliers playoff win streak reached ten games. They are one win away from tying the record and two from breaking it, but LeBron James says the team is not too concerned about it.

“I don’t think it feels like a streak,” James said after the game. “It feels like we won one game, we won the next game. We’ve taken one step at a time. We’ve tried to take care of business.”

Kyrie Irving led the way with 26 points for Cleveland, but it was the LeBron James show. With a layup around the eight-minute mark in the third period, he passed Shaquille O’Neal for fourth on the all-time career playoff scoring list. He also notched his 15th career postseason triple-double with 23 points, 11 rebounds, and 11 assists on the night.

James ended the night three assists shy of Jason Kidd’s career postseason mark (1263; third place). After the game he reflected on his place among basketball’s royalty:

For the Raptors, it was more of the same from Game One. Kyle Lowry couldn’t buy a shot. He ended up going 4-14 from the floor including just 1-8 from three-point range for 10 points. IN spite of his cold streak during the postseason, he says his confidence is not shaken at all.

“I’m super confident,” Lowry said after the game. “I missed countless 3s that I thought were good and that I made the last series. That’s why I’m not down on myself. We’ve got a game on Saturday, and I know I’m going to be much more effective. Simple as that.”

The series moves to Toronto for Game Three Saturday night. Maybe the home crowd will be able to wake up the Raptors’ offense and help them at least make the series a little more competitive.