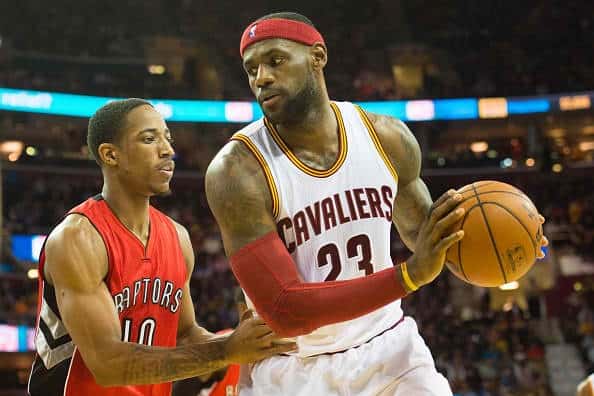 Can the Raptors beat the Cavaliers?

It is hard to say who is expected to get beat easier—the Oklahoma City Thunder or the Toronto Raptors. The world sees the Golden State Warriors as being an unstoppable force (which the Thunder proved wrong in Game One). Toronto barely made it through the Indiana Pacers and Miami Heat. How can they expect to give the mighty Cavaliers a game?

The road is certainly going to be a tough one for the Raptors. Not only do they have to deal with LeBron James. However, they can’t concentrate on him. The rest of the Cleveland lineup has been shooting well during the postseason—especially from behind the arc where they set a new single-game playoff record (25) and four-game series mark (77) against Atlanta.

“We’ve got to choose – pick our poison,” Raptors head coach Dwane Casey told the media. “They’re a lethal team right now. They can put a team on the floor one through five that can stretch you out and shoot the three. Our work is cut out for us to take away the three ball.”

To win, they are going to have to continue to do what has worked—trust Kyle Lowry and DeMar DeRozan, hope their shots fall, and hope the bench does enough to make a difference in the outcome of the game.

They are approaching the game with plenty of confidence. Kyle Lowry didn’t hesitate to throw a dig LeBron James’ way during his on-court interview following Sunday’s win over Miami:

“LeBron’s probably one of the best players in the league — besides Steph (Curry).”

He may not be the same force he was a decade ago, but probably one of the best? Come on.

The Raptors will probably not have an answer for James (no one has), but they will have one thing going for them in Game One. They will be coming in with the hot hand having played well in Game Six and Seven against the Heat while the Cavaliers have been sitting at home for over a week. Rest is always good at this time of the year, but there is such a thing as too much rest.

It would not be surprising to see the Cavaliers struggle to get back in rhythm while it will be just another day for the Raptors. However, while that may help the Raptors steal Game One, Cleveland will be ready to go in Game Two while the Raptors will be feeling the wear and tear a little more.
Tired as they may be, the Raptors are not satisfied with making the franchise’s first conference finals:

“We’re not done yet,” Casey said. “I know what it’s like to win a championship and not saying we can do that. But I think this group is hungry and never say never. I know one thing, our guys will compete, and that’s all you can ask at this time of year.”

The trick to this series may be Bismack Biyombo. If the young center can play like he did in Game Seven against the Heat for the duration of the series, along with a solid effort by Lowry and DeRozan, the upset could happen.

But don’t hold your breath.