Ezekiel Elliot: I Probably Have One Of The Easiest Jobs In America

When you are one of the best running backs in college football, you have every reason to be confident in our talents and abilities. When you are chosen with the No. 4 pick in the draft, you have every reason to feel like your confidence has been validated. So if Dallas Cowboys running back Ezekiel Elliot sounds a little overconfident—even cocky—it is not hard to understand why. 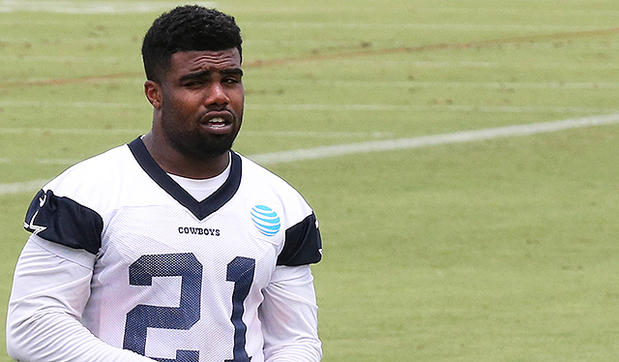 However, with a recent comment, his overconfidence may have zoomed past cockiness and is bordering on arrogance. So—what did he say?

“I think I probably have one of the easiest jobs in America,” Elliott recent said, per The Dallas Morning News. However, to be fair, he did qualify his statement:

“I get to run behind the best O-line in America, run through those huge holes, they make your job easy.”

Most would agree with him and as proof, they would point to the work DeMarco Murray and Darren McFadden did the last few years behind them. When Travis Frederick was drafted in 2013, the Cowboys offense averaged 4.5 yards an attempt (seventh in the league). DeMarco Murray had most of the carries (217 of 336) and averaged 5.2 a carry.

The following year they added Zach Martin to the offensive line mix and Murray went on to run for over 1800 yards and took home the regular season rushing title. His per carry average dipped down to 4.7 yards, but he also carried the ball 392 times (the rushing game averaged 4.6 yards a carry; third in the league) (FoxSports).

With Murray in Philadelphia, the team turned to more of a running back by committee comprised of lesser talented players, but still managed to average 4.6 yards a carry (fifth in the league).

Elliot certainly thought so before the draft when he talked about how much he’d like to run behind the line in Dallas. Should he stay healthy, there is some talk that he may have a shot at the rookie rushing record set by Eric Dickerson in 1983 (1808 yards).

It took him 390 carries to reach that mark. If Eliot can run like he did in college, it will not take him nearly as many. In 2014 he averaged 6.9 yards a carry and 6.3 yards a carry the following year. However, while his line will be among the best in the league, he will not see any competition even remotely like Hawaii, Kent State, or Indiana.

So—is he getting a little too cocky or confident? Not—but he also doesn’t need to keep giving his offensive line a pat on the back. They know they are awesome.

But a cool gift for Christmas or after his first 100-yard game wouldn’t hurt.