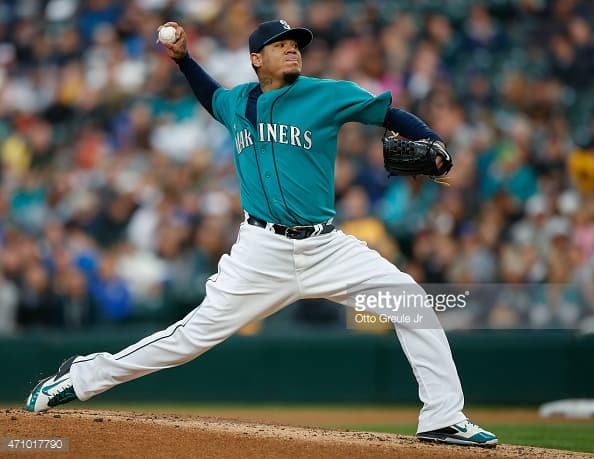 The Seattle Mariners’ injured list continues to grow. On Wednesday, the team placed ace Felix Hernandez on the DL with a calf strain. This is the first time Hernandez has been on the DL since 2008.

The injury is a bit of a mystery. Seattle manager Scott Servais says Hernandez felt pain in his leg during routine pre-game stretching on Tuesday, and had no previous complaints about pain in the calf. He’s hopeful that the matter isn’t serious and that the two weeks off can help Hernandez in the long run. “Right now I’m hopeful that it’s only a couple starts and we can get him back as soon as possible,” Servais said Wednesday. “Hopefully he’ll have a little extra left in his tank at the end of the year because he’s getting a little breather now. But it has nothing to do with his arm. It’s all related to the calf.”

Hernandez last started on Friday, so his placement on the DL is retroactive to Saturday. He’ll be eligible to return on June 12 when the Mariners conclude a three-game series with the Texas Rangers, who they currently trail by half a game atop the AL West. If the injury proves to be minor, Hernandez should only miss a couple turns through the rotation. It may be worth mentioning that his last start was his worst of the season, as he allowed six runs on eight hits over six innings in a loss to the Minnesota Twins, although he did retire 11 of the last 12 batters he faced.

While the Mariners hope Hernandez can rebound quickly, the Venezuelan ace is now 30 and may not bounce back so quickly from a muscle strain. On Wednesday, Servais described King Felix as feeling sore, saying, “It’s bothering him a little walking around. He’ll be down and not do a whole lot for the next couple days, but he’ll keep his arm activated so he doesn’t lose much time there.” Servais also said the team will be careful not to rush him back, explaining, “Obviously it’s his right leg, his push-off leg, and we all know his delivery and how much torque he puts on that leg, so we’ve got to be careful that he’s 100 percent when he comes back.”

Starting in place of Fernandez on Wednesday was James Paxton, who lasted just 3.2 innings, giving up eight runs on 10 hits in a 14-6 loss to the San Diego Padres. To be fair, only three of the eight runs he allowed were earned. Paxton has started 13 games for the Mariners each of the past two seasons with far better results, so there’s no reason for Seattle to be alarmed at the moment.

However, the Mariners are involved in a tight division race with the Rangers at the moment, and losing Hernandez for more than a couple of starts could prove problematic. After Seattle concludes their series with the Padres on Thursday, they will play six of their next 10 games against the Rangers, which is obviously an important stretch of games for both teams. The Mariners are hopeful that Hernandez can come back as soon as possible and pitch in the last of those six head-to-head games with the Rangers.