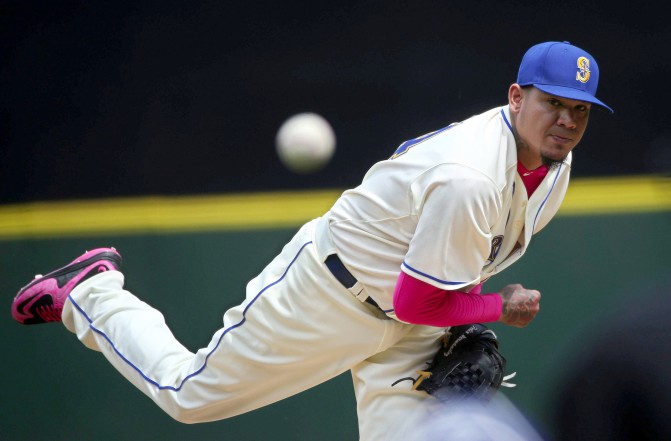 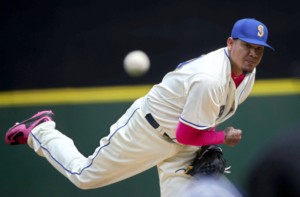 The Seattle Mariners look like a team that will be fighting for a spot in the postseason all year, but injuries are starting to take their toll on the team, specifically the loss of ace Felix Hernandez, who will not be returning as soon as the team had hoped. Hernandez went on the 15-day DL with a calf strain at the start of June, expecting to only miss a couple of weeks. But after he underwent an MRI, the Mariners announced Saturday that they will be without King Felix for at least another four weeks.

Hernandez says that his MRI showed improvement in the calf, but that doctors are prescribing four to six weeks of rest. He adds that the almost two weeks since he was put on the DL do count toward that time frame, giving him some hope that he can return sooner rather than later. Of course, that’s still not what Hernandez wanted to hear. “I haven’t been on the DL since 2008, so this is frustrating for me,” he said Saturday.

Doctors have told Hernandez that he should wear a walking boot as often as possible to help protect the calf. Servais also noted that because of the time he’ll miss and Hernandez never going through an injury like this before, it’ll take some time to get him back to full fitness once he’s cleared to begin throwing again. Servais didn’t say specifically, but it’s likely that he’ll need at least one or two rehab starts in the minors before he’s ready to pitch for the Mariners. This kind of timeline makes it unlikely for Hernandez to pitch for the Mariners before the all-star break.

In 10 starts this season before the injury, Hernandez was 4-4 with a 2.86 ERA, so he’s still very much the team’s ace. Lefty James Paxton is filling the vacancy in Seattle’s rotation and has looked sharp in his last two outings, including 6.1 scoreless innings against the Texas Rangers on Saturday, despite the Mariners eventually losing the game.

The Mariners now trail the Rangers by four games in the AL West, a bi-product of losing four of five games against the Rangers this month heading into Sunday’s meeting between the two clubs, the last time the two teams will see each other until the end of August. However, the Mariners currently hold the second wild card spot in the American League and are hoping they can continue to hang around until Hernandez finds his way back from the DL.