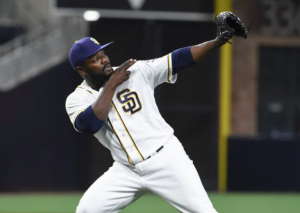 The free agent market for relief pitchers should be fascinating to watch this winter, as big-name players like Aroldis Chapman and Kenley Jansen are certain to arouse great interest from teams around baseball. But for teams looking to improve their bullpen as soon as possible, Ken Rosenthal reports that relievers Fernando Rodney and Pat Neshek may be available via trade as soon as the World Series ends and the offseason officially begins.

Rodney, who will soon be 40 years old, has a $4.5 million option with the Miami Marlins for next season, but there’s no guarantee the Marlins will pick up that option in an effort to save money. If Miami doesn’t pick up Rodney’s option, he will become a free agent. However, if a team wants to guarantee having Rodney for next season, the Marlins will likely be open to working out a trade before they have to decide whether to pick up his option or not.

It may be hard to remember, but Rodney was actually an all-star in 2016. In 28 appearances with the San Diego Padres during the first half of the season, Rodney was 17 for 17 in save opportunities and posted a 0.32 ERA. The Marlins traded for him, hoping he’d be able to solidify their bullpen. However, Rodney posted a 5.89 ERA after moving to Miami, which is why the Marlins reportedly have no intention of picking up his option for next season.

Nevertheless, Rodney’s performance during the first half of 2016 indicates that he still has something left in the tank. It doesn’t hurt that he has experience as a closer, and so there could be some interest from teams hoping to add a veteran presence to their bullpen.

Meanwhile, Neshek may be a more reliable, albeit more expensive, option than Rodney for teams looking to add a setup man early in the offseason. Neshek spent 2016 with the Houston Astros, posting a 3.06 ERA in 60 appearances. However, his struggles against lefties make the Astros hesitant to pick up his $6.5 million option for 2017. The price does seem a bit steep for a reliever who may be nothing more than a righty specialist, but Neshek does bring plenty of consistency. In the past five years, he’s never had an ERA higher than 3.62.

Considering the growing importance placed on relief pitchers, a team may be willing to take a chance on Neshek for $6.5 million, especially since they won’t have to part with much to acquire him from the Astros. With Chapman and Jansen likely to set the bar high this winter, even relievers on par with Neshek may demand high-priced contracts or multi-year offers. In this sense, trading a low-level prospect for Neshek may be a preferable option for some major league clubs.

Trading for either Rodney or Neshek would be in no way a franchise-changing move for any team, but for any team looking to rebuild its bullpen this winter, adding either player early in the offseason would be a good starting point. Whether there’s enough interest in either player to warrant a trade remains to be seen, but both are players to keep an eye on early in the offseason, as one or both could be on the move.