At this stage of the season, fans hope for good, close, hard-fought games. They hope to see the best of the best playing and for both teams to bring their “A” games. Overall—it is safe to say that the Oregon Ducks and North Carolina Tar Heels played fine games. But Oregon would probably be willing to do just about anything for another shot at the final minute of Saturday night’s Final Four game.

After Tyler Dorsey had hit a three-pointer to pull Oregon within three with 54 seconds to play, the Ducks chances were given a boost when Jordan Bell pulled down a rebound after Theo Pinson missed a jumper. But rather than attempt a three-pointer and tie the game up, they settled for a layup with six seconds left in the game. 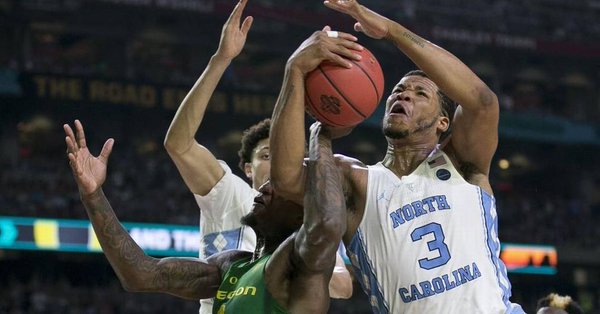 But there was a method to the madness. Tyler Dorsey fouled Kennedy Meeks with five seconds on the clock. By sending one of North Carolina’s worst free throw shooters (63.3 percent) to the line, the Ducks were probably hoping he would miss one or both. If he did, they could still tie the game or even win it with their final shot.

That is if they succeeded in pulling down the most important rebound of the season—which they did not. But then good fortune shined down on the Ducks as they were able to quickly foul Joel Berry II. There was just one problem—he wasn’t a bad free throw shooter (79.1 percent).

But luck—both good and bad–was with the Ducks again. Berry missed both—and they missed the rebound. For some reason, Jordan Bell failed to box out his man either time which gave North Carolina the chance they needed to pull down a game-clinching rebound.

Jordan Bell owned up to his mistakes after the game calling the first miss a lapse in concentration and the second simply not doing his job.

“I thought I had the second one,” Bell told reporters. “He just took it from me. … I hit him and I went for it instead of hitting him and holding it. We talk about that all the time.”

It was a terrible way for the Ducks to lose the game but an exciting way for a good Final Four game to finish.

For most of the first half, the game remained close, but then the Tar Heels went on a 7-0 run to end the first half and take a 39-36 advantage. North Carolina hadn’t shot well but made up for it with volume attempting 34 shots (Oregon only tried 24).

The Tar Heels led throughout the second half but were never able to put the Ducks away. 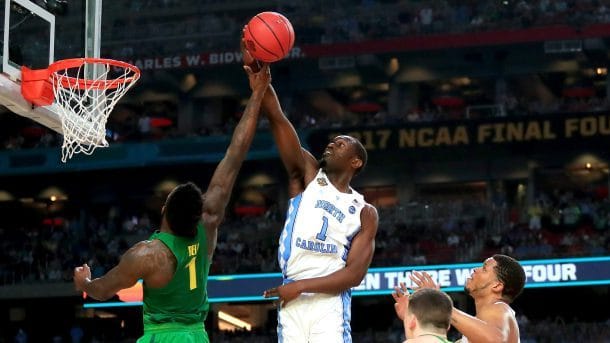 Joel Berry II played despite his injured ankles but did not contribute much shooting just 2-14 from the field and 5-9 from the free throw line. But Kennedy Meeks more than picked up the slack with 25 points and 14 rebounds.

“If it wasn’t for Kennedy Meeks, we wouldn’t have been in the basketball game,” North Carolina head coach Roy Williams said after the game.

North Carolina will need another good game from Meeks if they are going to beat Gonzaga in the title game Monday night. But he’ll need a lot more help from the rest of the team if the Tar Heels are going go to win. The rest of the roster shot 11-55 from the field.