After starting the new year with nothing but ranked opponents on their schedule for a few weeks, the Florida State Seminoles were probably looking forward to playing Georgia Tech and Syracuse. Both are good teams but not great teams; teams they should be able to handle after going 5-1 against six ranked teams the last three weeks.

Then Georgia Tech took them down relatively easy, 78-56, Wednesday night. It’s just one game, so nothing to worry about—right? So does Saturday’s 10-point loss to Syracuse mean it’s time?

Much like Wednesday night’s loss to Georgia Tech, the Seminoles got off to a bad start. They scored first and scored early but didn’t hit another bucket for another six minutes. Luckily, the Orange were not doing much better at the time, and they were only down by five, 9-4.

Syracuse ended shooting well from the floor in the first half (50 percent), but once again Florida State had trouble making baskets and hit only 31 percent of their shots. A 16-4 run by the Orange late in the half, put Syracuse firmly in control at the break, 44-26.

Much like in the loss to Georgia Tech, the Seminoles looked much better in the second half. They were able to cut the deficit down to single digits fairly quick but were not able to completely close the gap. Dwayne Bacon hit a three-pointer to get Florida State within two with 1:48 to play, but then John Gillon went on a tear with ten points—eight from the foul line—to end the game and secure the win for Syracuse.

“This was huge,” Gillon said after the game. “This was the biggest game of my life. If I’m not going to be a leader, we’re not going to be successful. I’m taking it upon myself to be the best leader I can be.”

Andrew White led the way for Syracuse with 24, Tyler Lydon scored 14, and Tyler Roberson chipped in 10 off the bench to help the Orange beat their first ranked opponent of the season.

“This game shows we have the ability,” White said. “We just have to show we can do it night in and night out.”

The loss is only the third of the season for Florida State, but it’s their second in a row. So, a week after moving up to No. 6 in the AP Poll for the first time since the 1993 season, it appears that the Seminoles will be falling out of the top ten when the new poll comes out. 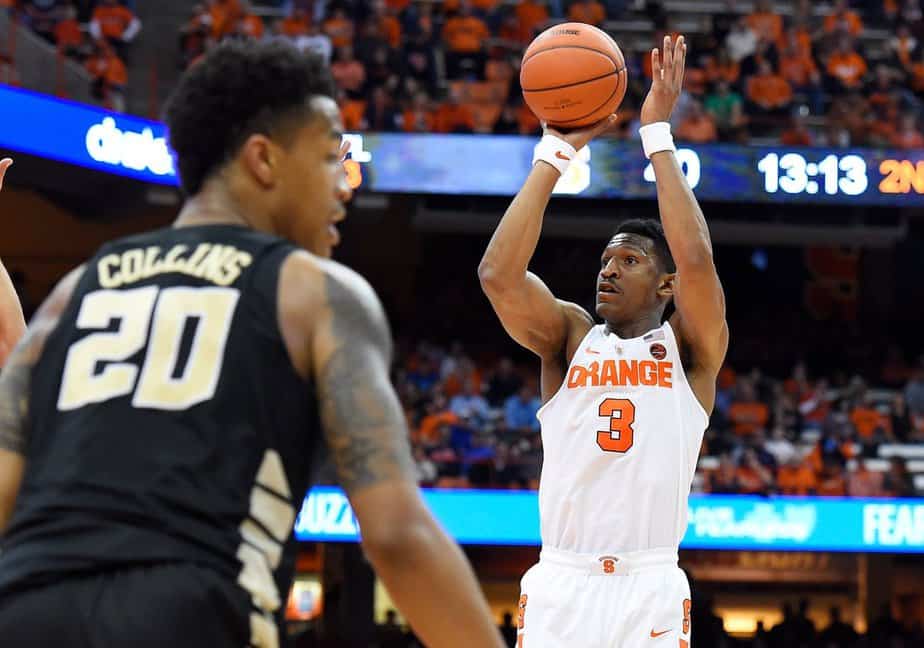 “At the end, we had a chance to win, but I thought we made some poor decisions in the last two or three minutes,” Seminoles coach Leonard Hamilton said after the game. “But sometimes you have to give your opponent credit. We got it to two four or five times but couldn’t get over the hump.”

Florida State will have the unenviable task of trying to rebound against a Miami team that took down No. 9 North Carolina Saturday. Syracuse will try to stretch the winning streak out to three games when they take on North Carolina State Wednesday. If they succeed, it will be their first winning streak of more than two games since they started the season with four in a row.