Athletes tend to get into the media for all sorts of things besides what they do on the gridiron. Often it is for the wrong reason, but on occasion, it is for doing something good. Making a difference in society qualifies as a pretty good reason.

However, how you do it can make all the difference—or can make sure that the athlete’s actions actually do make a difference. Taking a seat (or a knee) in order to generate discussion can be good if it leads to something productive and useful being done. But if all it does is get people talking, what good did it actually do? 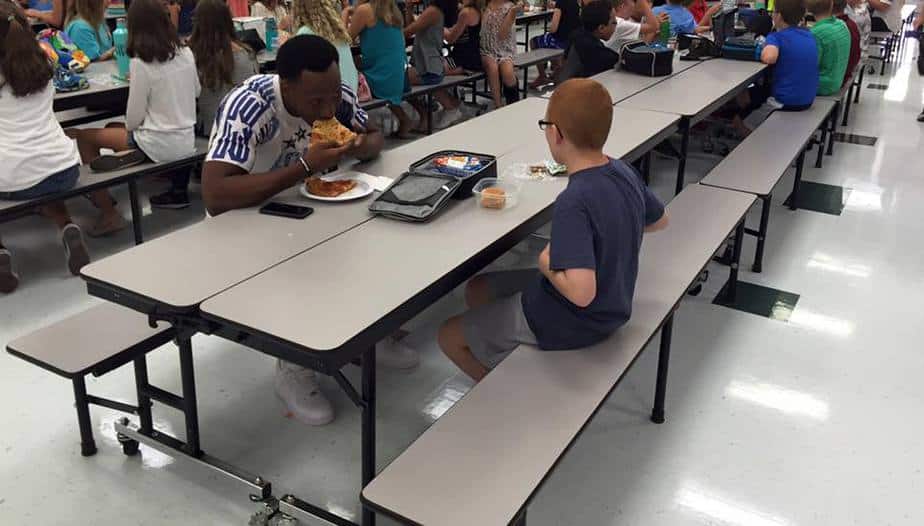 Action with purpose is what matters (and just taking a knee or sitting down doesn’t count). However, action like the kind that Florida State wide receiver Travis Rudolph recently took—now that meant something.

The story has quietly been gaining steam all week while the nation talked about freedom of speech and a preseason NFL game. Anyway…it appears that Randolph and a handful of his Seminoles teammates were visiting a local middle school when Randolph noticed a young boy, Bo Paske, eating lunch by himself.

So Rudolph did what he thought he should do:

“I asked if I could sit next to him, and he said ‘Sure, why not?'” Rudolph. “I just felt like we had a great conversation. He started off and was so open. He told me his name was Bo, and how much he loves Florida State, and he went from there.”

Rudolph couldn’t have known it when he asked, but young Bo is autistic. For kids on the autism spectrum it can be very hard to make friends. Their social skills are not the best and kids—being cruel like kids can be—make fun of them because of their mannerisms (i.e. flapping hands). Since they are different, they often don’t get invited to all the birthday parties like the rest of the class or have anyone show up at theirs.

Living with autism is very tough—for the person with it as well as their family. So acts of kindness like this mean more than most people could imagine.

Bo’s mother talked about Rudolph’s visit on Facebook and what it meant to her and Bo (ESPN):

“I’m not sure what exactly made this incredibly kind man share a lunch table with my son, but I’m happy to say that it will not soon be forgotten,” she wrote on Facebook. “This is one day I didn’t have to worry if my sweet boy ate lunch alone, because he sat across from someone who is a hero in many eyes. Travis Rudolph thank you so much, you made this momma exceedingly happy, and have made us fans for life!”

Bo response to what it was like was even better. During an interview, he had this to say when asked about his unexpected lunch guest:

“It was kind of like me sitting on a rainbow,” he said.

All it took was someone sitting down and having lunch with him. So sitting down can make a difference—if done for the right reasons.