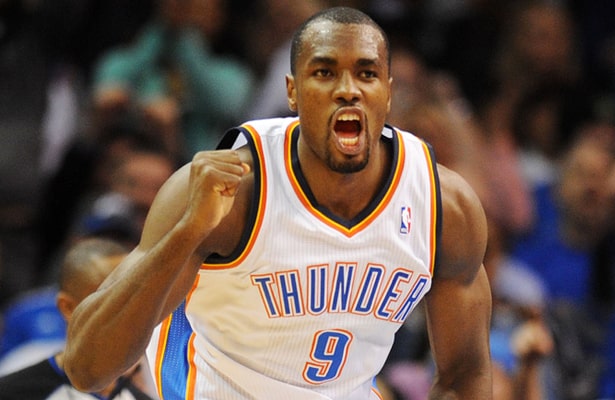 There are two times when NBA fans can expect to see a lot of trade activity—before the in-season trade deadline and the days leading up to as well as the day of the draft. In respect to in-season trades, teams are trying to improve their playoff odds now. On draft day it is all about filling needs and being better prepared for next season. This year saw several teams make moves leading up to and during the draft.

The big trade on Draft Day involved the Oklahoma City Thunder and Orlando Magic. The Thunder sent Serge Ibaka to the Magic for guard Victor Oladipo, forward Ersan Ilyasova and the rights to the No. 11 pick (Domantas Sabonis).

Ibaka gives the Magic a battle-tested playoff veteran and a staunch defender while the Thunder get another scoring threat in talented shooting guard in Oladipo and some much-needed salary cap room (along with Ilyasova and Sabonis).

The move may weaken the Thunder’s defense, but they are likely hoping Kevin Durant will see it as an attempt to improve the offense and want to stay.

“Tonight represented an opportunity to build the versatility, depth, and skill of our basketball team,” Thunder GM Sam Presti said via ESPN.

“Victor, Ersan, and Domantas represent the character, work ethic, and toughness that we relentlessly pursue with the Thunder. Through the continued emergence and development of our core, we were able to capitalize on the opportunity to acquire three highly skilled professionals.”

Other moves made on Draft Day included:

Before the draft, the Chicago Bulls sent Derek Rose, Justin Holliday, and a second round pick in next year’s draft to the New York Knicks for Robin Lopez, Jose Calderon, and Jerian Grant. This move overshadowed the first trade the Indiana Pacers made (Atlanta sent Jeff Teague to Indiana, who sent George Hill to Utah, who sent the No. 12 pick to Atlanta).