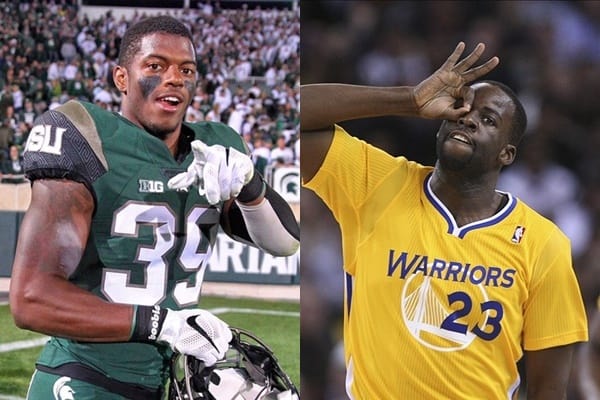 Golden State Warriors superstar Draymond Green has a bit of a reputation on the court. He has been known to be a little volatile at times and take things a too far—like when he kicked a couple of guys in the family jewels during last season’s playoff run. Former Michigan State Player Jermaine Edmondson is probably banking on people thinking Green is just as volatile off the court.

That way they will believe his version of events that transpired over the weekend and resulted in Green going to jail for assaulting Edmondson.

According to media reports, around 2:30 AM Sunday morning the two happened to be at Conrad’s Grill in East Lansing (Green played his college ball at Michigan State). An incident transpired that resulted in Green allegedly slapping or punching Edmondson. Police happened to be in the area, responded to the commotion, and arrested Green.

Exactly what did transpire is not known. Green is not talking, instead referring to his legal team when asked about the incident. While that is a smart tactic, that means the only version of the incident being made public is Edmondson’s.

The two supposedly ran into each other Friday night at another establishment. According to Edmondson, Green bumped into him and when he asked him to watch where he was going Green responded by asking if Edmondson knew who he was.

“I was talking to one of my teammates when Draymond bumped into me, and I said, ‘Hey bro, can you at least say excuse me?'” Edmondson, 22, said in a statement to the East Lansing Police Department (ESPN). “… I asked who he was to think that it’s OK to bump into somebody without saying excuse me. He then said, ‘I pay for n—as like you scholarships.’ Then I started to say you have me messed up before I was choked out by two guys who were with him.”

In the police report, Edmondson went on to say when he and his friends arrived at Conrad’s he saw Green talking to his roommate. He proceeded to walk up to the duo and tell Green “last night wasn’t cool.”

Things escalated from there and ended with Green, who was apologetic when talking with police after the incident, going to jail.

No one was injured, but Edmondson has claimed he was punched—not slapped. While the incident appeared to be a minor one involving two clashing egos, it looks like Edmondson will be pursuing legal action.

According to his lawyer, Corey Minor Smith, Edmondson’s life has been forever altered because of the incident (TMZ):

“My client is a student-athlete who was punched and assaulted by Mr. Green in an unprovoked, unnecessary attack,” Smith said. “His life has been forever altered by the events of that weekend.”

He received a single blow to the face that caused no injury. How in the world was his life altered for more than a day let alone forever?

Edmondson has since been released by Michigan State, but the move has nothing to do with Green. Spartans head coach Mark Dantonio announced it Wednesday night in a statement:

“In discussions with Jermaine Edmondson following spring practice and in the weeks thereafter, it became clear that Jermaine wanted to play a larger role on the team,” Dantonio said (ESPN). “After consulting with him in the summer, he felt it was in his best interest to finish his playing career elsewhere. We have granted his immediate release to transfer to another institution to have that opportunity.”

The only logical reason for making the claim his lawyer did, would be if a civil action is forthcoming. But with the police stating that no injury occurred, Edmondson’s lawyer is going to be hard-pressed convincing anyone his client’s life was altered for an hour, let alone forever.