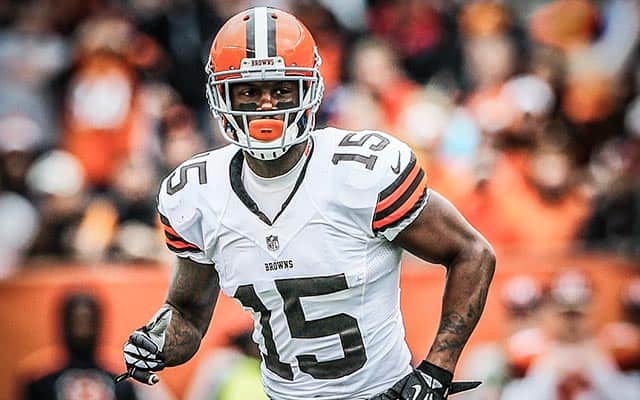 One of the most common things you hear whenever someone gets in trouble with the law is “this could have been avoided” or “it didn’t have to happen.” In the case of former NFL wide receiver Davone Bess, that is true.

There is no way the story can be paraphrased and do it justice so here is how the police reported the incident per ProFootballTalk:

A Gilbert patrol officer attempted to conduct a traffic stop on a silver Mercedes driving without the headlights on,” a press release from the Gilbert police department explains. “The vehicle pulled into a parking lot of a sporting goods store but continued driving slowly through the lot and would not stop for the officer.  The driver, later identified as Davone Bess then rolled down his window and began making gestures with his hand shaped like a gun and motioning that he was shooting the officer.  The officer gave him numerous commands to stop the vehicle and exit, however he continued to ignore the commands.  Bess then removed his shirt and continued with the hand gestures.  He then left in the parking lot in the vehicle at a high rate of speed, nearly colliding with another occupied vehicle.

The police pursued but stopped fearing that a danger to the public could be created. Rather than chase, they drove out to his house and waited.

To make the long story short, Bess ignored the cops, waived a knife around, and eventually scared his family enough that they left the house. Police eventually received a warrant to enter the house and sent a K-9 unit in first. The dog bit him on the arm, and the police were able to take him into custody.

He is being held on felony charges of endangerment, flight, and failure to stop.

On the surface, you could look at this scenario and say he should have just pulled over, taken the ticket, and gone about his merry way. However, apparently his issues go much deeper than driving without his headlights on—and he has a pretty lengthy history of mental instability.

Towards the end of his time with the Miami Dolphins, there was an incident at his home that ended with six police officers having to restrain him. As they removed him from the home, he yelled out “Hide the guns,” Where is my weed,” and “I want to get in the end zone; throw me the ball.”

He was hospitalized against his will at the time and would soon be traded to the Cleveland Browns. His time with them would end after he was put on the non-football illness list towards the end of the 2013 season.

Not long after the 2013 regular season ended he was arrested after acting erratically in the airport in Fort Lauderdale. He was seen dancing around with his pants at his ankles, spilled a security officer’s coffee on his pants, and acted like he wanted to fight.

At the time, he checked himself into a treatment facility. According to several reports, he was having difficult dealing with family issues. In an interview, he talked about feeling betrayed and feelings of mistrust involving his family.

Had anyone pushed him to get the help he needed after several incidents maybe the latest one never would have happened. Whatever help he got after the airport incident was clearly not enough. Hopefully, this time, he gets the help he needs and doesn’t end up being another Titus Young.