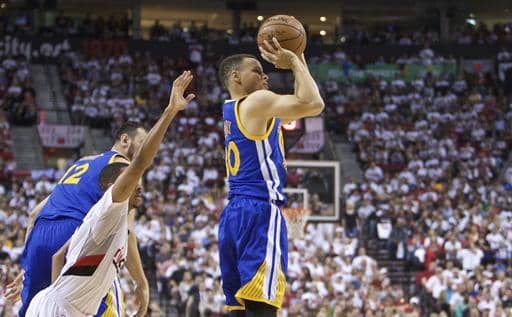 The Warriors close out their Playoff series with the Portland Trail Blazers.

No one outside of Portland thought the Trailblazers had a shot at beating the Golden State Warriors in their Western Conference Semifinals series. It’s not that the Trail Blazers are not a good squad. It is going to take a lot more than “good” to beat the defending champs.

Portland did play well Wednesday night in Game Five and even held the lead going into halftime. It helped that the league MVP, Steph Curry, had a slow start to the night (3-9 in the first half). Some rustiness was expected since it was Curry’s first start since injuring his knee against the Houston Rockets.

However, if there is one thing Curry’s injury has shown us, it’s that the other half of the Splash Brothers—Klay Thompson—is not to be taken lightly.

Thompson carried the Warriors for most of the night with 33-points, but he didn’t have to do it all. Curry came on strong when it mattered most. His three-pointer at the end of the third gave Golden State a 93-91 lead going into the final period.  In the fourth quarter alone he had 14 points including his fifth three-pointer of the night with 24 seconds left to put the Trail Blazers away.

“We know what it takes to win in the playoffs,” Thompson said after the game. “That might be the closest five-game series of all time.”

Curry made a point to give Thompson credit for getting the job done on offense and defense while talking to the media:

Had their opponent been anyone else, the Trail Blazers would probably be the ones moving on to the Western Conference Finals after averaging 111 points a game during a series. However, they had the misfortune of playing the Warriors who averaged over 118 points a game.

“We should be proud of the way we pushed them,” Lillard said. “It could easily have been a seven-game series.”

The two teams combined for a record number of three-pointers during the five-game series—135 (71 for Portland and 64 for Golden State).

The Warriors will now have to wait to see if they will face the San Antonio Spurs or the Oklahoma City Thunder in the conference finals. Golden State swept the season series with the Thunder, 3-0, but suffered one of their nine losses to the Spurs (but still won the season series 3-1).

The loss came on a rare night when both of the Splash Brothers had off nights from behind the arc. They combined to go 2-19 from three-point range.

Ideally, the Warriors would like to see the Spurs beat the Thunder and force the series to go to Game Seven with San Antonio winning. That way San Antonio’s aging roster will have to play with little-to-no rest. Tim Duncan, Manu Ginobili, and Tony Parker haven’t been playing well anyway, but the best way to keep them from getting on track would be not giving them a chance to rest.