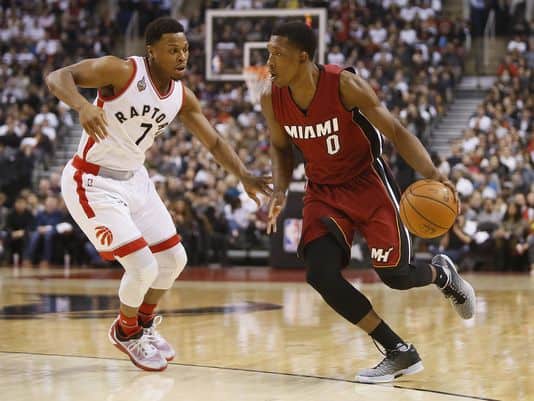 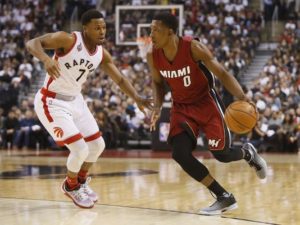 LeBron James has commented on how he would like to play his former team, the Miami Heat, in the Eastern Conference Finals. However, if the Toronto Raptors have anything to say about it LeBron may not get his wish.

The series between the Heat and the Raptors can best be described as a “scrappy one.” It’s been physical. It’s been pretty rough at times. To say the series has had its fair share of injuries would be an understatement.

Kyle Lowry had a cut over each eye after Wednesday night’s game, and Demar DeRozan described the pain in his injured thumb like someone was taking a blowtorch to it. The duo hasn’t played great in every game during the series, but they were determined to get the job done on their home court.

“They’re our guys. We can disparage them all we want and talk about how bad their shooting is, but you don’t forget how to score the basketball,” Raptors head coach Dwayne Casey said after the game.

The Raptors backcourt came into the game shooting just 33.1 percent from the field during the playoffs. According to ESPN Stats and Information, it is the lowest playoff percentage of any backcourt duo in the last twenty years.

DeRozan had a decent night from the floor (11-22), but Lowry still had some trouble finding the basket (9-25), but hitting four of nine from behind the arc helped him finish with a respectable 25 points.

Together they shot 42.5 percent from the floor.

Some coaches would be worried about having two players go cold during a playoff series, but Casey is confident his guys will find their shots again.

“We have faith in those guys. They carried us the entire season, and now one time we doubt their ability to score the basketball. And now they have to ramp it up again for the next game.”

Should the Raptors win Game Six in Miami Friday night, they will make the Eastern Conference Finals for the first time in franchise history. Elimination games are notoriously tough, and the Heat will certainly not make it easy for Toronto.

Like most teams, Miami plays its best at home, but chances are they could end up having to play without their starting front court. Chris Bosh has already been declared out for the season; Hassan Whiteside went down with a knee injury in Game Three (against Toronto), and Luol Deng may not be available.

Deng left Game Five with a wrist injury, and it is unclear if he will be able to play.

Dwyane Wade recognized the impact injuries have had on the series after Game Five, but also, that injuries are just part of the game.

“We’ve lost two big guys in this series so far. The worst part of basketball is injuries; it changes the whole outlook of your team, but you keep pushing along. We’ll be ready for Game 6.”

If the Heat is going to avoid elimination Friday night, the Heat are going to need Dwyane Wade to have a stellar night like he did when the Heat were facing elimination against Charlotte in the first round. Even if he does, it will help if someone else on the roster would step up.