Giants Blow Another Lead To Hand NLDS to Cubs 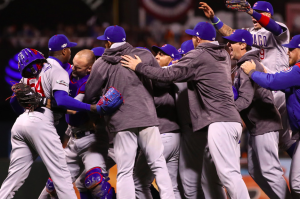 The biggest weakness the San Francisco Giants have had all season came back to bite them yet again at the worst possible moment. The Giants held a 5-2 lead over the Chicago Cubs in the 9th inning of Game 4 of the NLDS, three outs away from forcing a decisive Game 5 in Chicago. But a parade of ineffective relief pitchers allowed four runs in the 9th, handing Game 4 and the series to the Cubs, who will advance to the NLCS for the second straight season.

The Giants wasted eight brilliant innings from Matt Moore, who allowed two runs while striking out 10 and deserved far better support than what the San Francisco bullpen gave him. Derek Law, Javier Lopez, and Sergio Romo all faced one batter who they failed to retire before Giants manager Bruce Bochy made a pitching change. The Giants needed five pitchers to get through the 9th inning, and when all was said and done, the Cubs had scored four runs and taken the lead, which was secured without issue by Chicago closer Aroldis Chapman.

“We didn’t play Cubs baseball for eight innings,” Cubs president Theo Epstein explained after the game amidst a celebration in the visiting clubhouse. “We didn’t have good at-bats. We weren’t playing heads up. We weren’t ourselves. That frustration contributed to the eruption in the ninth.”

San Francisco’s loss ends a streak of three straight World Series victories in even years (2010, 2012, 2014), something not lost on the Cubs. “Any time you can survive like that against an October giant like that — it’s hard to finish any team in the postseason, let alone a team with that kind of character and pedigree,” said Epstein after the game.

Of course, a late-inning rally shouldn’t have been a surprise to anyone, even if Cubs fans were beginning to lose the faith when the team was three outs away from a winner-take-all game back home. In addition to the Giants being prone to late-inning bullpen collapses this season, the Cubs were one of the best in baseball this year at coming from behind late in games.

“We’ve had several games that feel like that during the season but when you do it in the postseason, it gives you a whole ‘nother level of confidence late in the game,” said Ben Zobrist, who contributed an RBI double during Chicago’s 9th inning rally. “Once (Kris Bryant) and (Anthony Rizzo) got on, you kind of felt like, something good is going to happen here. Really, the last two nights, that’s what the Giants have done, they’ve put great at-bats together, rallies together. Tonight was our night.”

Afterwards, the Cubs were equal parts joyous and relieved to advance to the NLCS and avoid a Game 5 against a Giants. Clinching in Game 4 also gives the Cubs a little extra time to celebrate before they ultimately refocus on the NLCS. “We’ve got a lot to overcome in the postseason with the history of this franchise,” Zobrist said. “Going into the NLCS, we’ve got to prove we can do it in the NLCS. Last year, they didn’t. This is a new group. We’ve got to get over that hump. That’s the next goal, and we’ve got to find a way to do it.”

The Cubs will open the NLCS Saturday at home against either the Washington Nationals or Los Angeles Dodgers, two teams that will play Game 5 of their series on Thursday. No matter who they play, the Cubs will be favored to win and advance to the World Series.