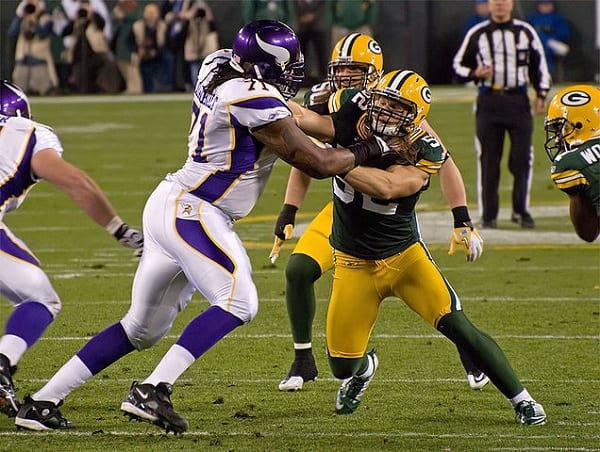 The 2016 NFL season’s opening week is in the books, which means it’s time to look at Week 2’s picks against the spread. On Sunday Night Football, we have a battle between the two NFC North favorites. Who has the best odds in this one?

Prior to Teddy Bridgewater’s horrific knee injury, the Vikings were expected to be an extremely good team with a chance to win the division for the second year in a row. But is that still the case?

As everyone knows by now, the Vikings weren’t willing to give up on this year without their young QB, and traded a first-round for disgruntled Philadelphia Eagles quarterback Sam Bradford. How much will that help? That remains to be seen, but based upon Bradford’s play the past couple of years, many suspect this was just a bad trade.

Sure, they were desperate. But Bradford is injury-prone himself, and simply hasn’t been all that impressive since his rookie year.

That said, they did give up a first in 2017 and fourth in 2018 to get him, which means he’s definitely playing as soon as possible. The Vikings, though, haven’t announced who’s starting yet in this Week 2 matchup, hoping that’ll gain them an edge with the Packers having to prepare for both quarterbacks.

Outside of the quarterback position, this is a stout team nonetheless. The defense is incredible — and should actually get all the credit for a Week 1 win over the Tennessee Titans — and the running game should be productive most games. But that passing game is what’s kept them out of any serious championship contending talk. Bridgewater was slowly improving, and the weapons were slowly getting better on the outside. His injury is really a damper that not even Bradford may be able to fix.

Green Bay, on the other hand, has no quarterback issues. Instead, they still have the best signal caller in the NFL in Aaron Rodgers. But they will have their hands full in this game.

Last season, these two teams split the season series. The Pack took the first one 30-13, but they were held to just 13 themselves in the second matchup. In that game, the Packers were made completely one-dimensional as they averaged under three yards per carry. Even though the Vikings themselves struggled mightily on offense, they were able to come away with the win thanks to such a great defensive performance.

Can they really count on a defensive touchdown, though, like they did in that game or in Week 1 of this year? As previously stated, the offense wasn’t able to do much of anything, as they only scored 12 points off of four field goals. And that was against the Titans, whose defense was pitiful last season.

If Rodgers and company take care of the ball, limiting their turnovers, then the Packers should have a great shot at victory in this Sunday night game.

Bets to Make: lay the points with Green Bay. They may not score a ton, but they’ll outscore the Vikings by more than three regardless of whether it’s Shaun Hill or Bradford under center for Minnesota. That said, take the under. Scoring will be coming at a premium in this one.