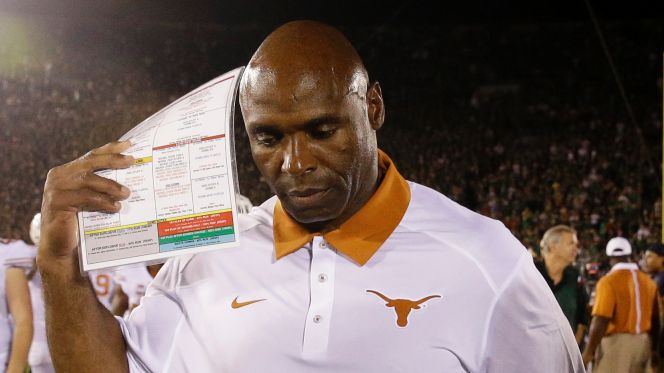 Charlie Strong as probably feeling good heading into Saturday’s game against the Kansas Jayhawks. His defense had been improving, his offense was decent (and would be even better in the years to come), and with one more win—which he was surely going to get against Kansas—his Longhorns would become bowl eligible for the second time during his tenure as head coach.

But then the dreaded worst-case scenario unfolded. Strong’s team had a complete meltdown against one of the worst teams in college football and lost.

Losing the game should be viewed as a massive failure on Strong’s part. As the head coach, the responsibility ultimately falls on him to have his team prepared to play better than they did. However, while they did a lot of bad things, there are some positives the Longhorns can take from this game.

Texas committed five turnovers in one-quarter of play (the second) including an interception returned for a touchdown. But otherwise, the turnovers only produced a single field goal for the Jayhawks. That says something about the Texas defense. As maligned as they have been, the unit was able to step up when the team needed it to.

After struggling as bad as they did in the first half (and especially the second quarter), it would have been easy for the offense to implode in the locker room, and then come out for the second half and continue to stink. Instead, the defense caused a pair of turnovers in the third quarter which the offense was able to turn into a pair of touchdowns and an 11-point lead.

Where things go wrong is in the fourth quarter. The defense gives up a long touchdown drive, D’Onta Foreman fumbles, and Kansas kicks a field goal as time expires to send the game to overtime. A win could still be salvaged, but the offense would need to get it together—but they couldn’t.

Shane Buechele threw an interception and Kansas kicked a field goal to secure the win and end a 23-game losing streak to FBS teams. But that wasn’t the real kick in the pants for Texas. It was the first time Kansas had defeated the Longhorns since 1938. 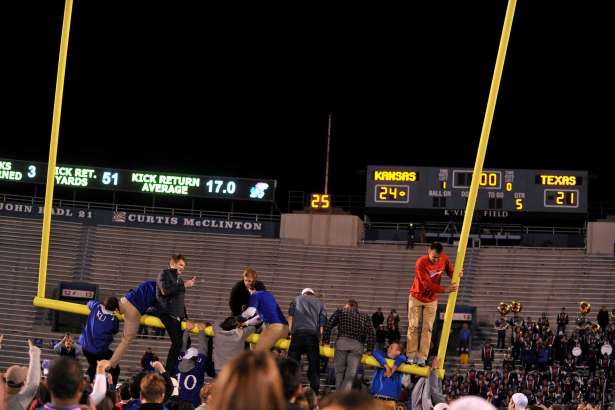 Kansas fans stormed the field. A few climbed the goal posts and tried to bring them down, but didn’t have the strength to hold on and fell off (they eventually got them).

The loss dropped the Longhorns to 5-6 on the season and 16-20 under Strong, the worst record for a head coach in program history.

Rumors immediately began to swirl that Strong would be fired. The word Sunday morning was that school officials were meeting to discuss Strong’s future. Sunday night just about every news outlet began reporting it—Charlie Strong would indeed be fired. It was just a matter of when.

“There are a number of rumors out there about the status of Coach Strong.” Perrin’s statement said. “I’ve said it all along, we will evaluate the body of work after the regular season. We have a game to get ready for against TCU on Friday, and I hope our fans will come out and support our team. We’ll discuss where things stand after that.”

While there are several things wrong with the team and the program, it would not make sense to fire Strong at this point. With a win against a beatable TCU team Friday, the Longhorns would be 6-6 and headed to a bowl game. Should they win, they could still finish the season with a winning record—which is an improvement over the last few years. 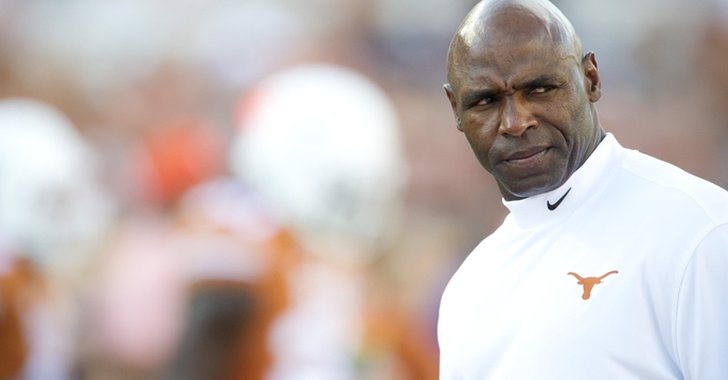 But the boosters, much like fans in the NFL, are impatient. They want to be back on top now and don’t have the patience to wait and see. They fail to realize or remember how flawed the program had become under Brown, and just how much Strong has had to fix since he arrived in Austin.

If the Longhorns do fire Strong, the University would still owe him over $10 million for the last two years on his contract. Apparently, many of the boosters think that is fine if they can land Houston head coach Tom Herman—who has not given any indication he would be leaving Houston.