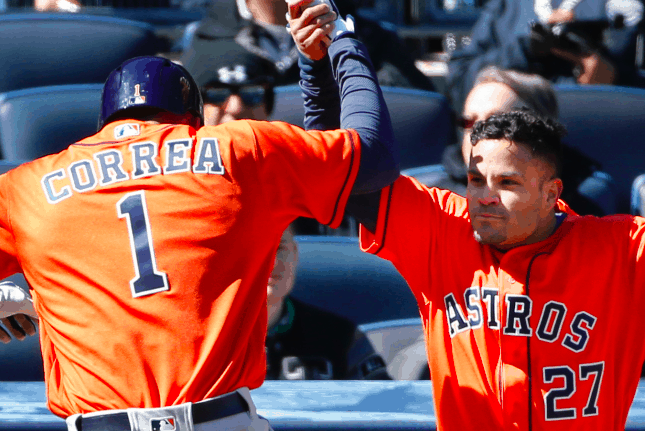 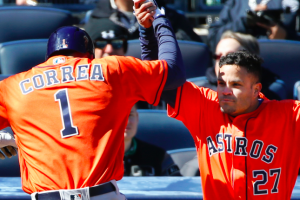 On paper, the Houston Astros were one of the biggest winners of the offseason. They made several bold moves to improve an already potent lineup. But will those moves be enough to get the Astros back to the playoffs in a competitive AL West?

Houston’s rotation drastically underperformed last season, which was a big reason why the team missed the playoffs. Dallas Keuchel took a huge step back in 2016 after winning the Cy Young in 2015, while Collin McHugh also had a disappointing season after winning 19 games in 2015. The Astros are counting on both to rebound and pitch like frontline starters in 2017 after failing to add an ace during the offseason.

The Astros will also be counting on Lance McCullers, who impressed with a 3.22 ERA in 14 starts last season but needs to stay healthy after two stints on the DL last year. Joe Musgrove is another young arm Houston is hoping can emerge as a reliable starter. Houston also has Mike Fiers, Brad Peacock, and Charlie Morton in the mix, so they should have adequate depth, especially with pitching prospects like Frances Martes and David Paulino potential options the second half of the season.

However, while rotation depth may not be a problem for the Astros, there are still questions about whether they will have the frontline starters necessary to compete for a playoff spot. If Keuchel is unable to bounce back or McCullers has trouble staying healthy, there may be pressure on Houston to trade for a starter at some point during the season.

Houston’s bullpen also has some issues to sort out after changing closers multiple times last season. That being said, the Astros do have several pitchers who are capable of being reliable bullpen arms, including Ken Giles, Will Harris, and Luke Gregerson.

Giles, of course, is coming off a disappointing season but should get another chance to become the team’s closer after establishing himself as a dominant reliever in 2014 and 2015. The Astros are also high on Chris Devenski, who impressed with a 1.61 ERA in 43 relief appearances last year. Despite some questions heading into the season, Houston’s bullpen does have the potential to be one of the best in the American League with a strong contingent of late-game relievers.

Heading into the offseason, the Astros had an impressive core of young players, including Jose Altuve, Carlos Correa, and Alex Bregman, and they spent the winter complementing those players with more established offensive threats, including Josh Reddick, Carlos Beltran, and Brian McCann.

The hope for the Astros is that players like Altuve and George Springer can act as table setters for a potential Murderers Row in the middle of the lineup with the likes of Beltran, Reddick, Correa, and McCann.

Houston also has a couple x-factors in Bregman and Yulieski Gurriel. The 22-year old Bregman caught fire late last season and could be poised for big things in his first full big league season. He may also benefit from having little pressure on him, as he’ll likely hit down in the order. Gurriel, meanwhile, has a high upside offensively and could become an impact player as he adjusts to big league pitching after signing with the Astros out of Cuba last summer.

If everything goes as expected for the Astros this season, they have a chance to be the best offensive team in baseball. There may be some tradeoff on the defensive side, as Gurriel is still learning first base and Springer is being asked to move to center field, where he has little experience. However, Houston’s offense should be good enough to make up for some deficiencies on the defensive side of the ball.

The Astros won 84 games in 2016, which wasn’t enough to get them back to the postseason. Even with several notable acquisitions over the winter, it may be difficult for the Astros to do significantly better than that in what appears to be one of the most competitive divisions in baseball.

Look for the Astros to finish 88-74 this season. The team’s offense will be much improved, but it will only be able to take the team so far. There’s still no assurance that they’ll have the elite pitching needed to win a competitive AL West. However, 88 wins should be enough to put them in contention for a wild card spot.