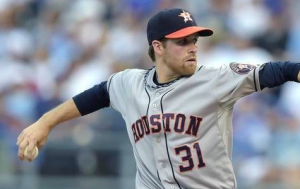 The Houston Astros have been dealt a significant blow to their pitching staff early in the season. The club announced Saturday that right-handed starter Collin McHugh is being shut down for the next six weeks because of an impingement in his elbow. McHugh, who won 19 games for the Astros in 2015 and 13 more last year, began the season on the DL and doesn’t figure to return to the Astros until the latter half of May at the earliest.

McHugh made just one official appearance with the Astros during spring training before being sidelined due to fatigue. He was placed on the 10-day DL before the start of the regular season with what the team called shoulder tendinitis, although the Astros remained optimistic that he would return sooner rather than later. He made a triple-A rehab start on Thursday but was pulled after just one inning because of tightness in his elbow and biceps. McHugh struggled in that inning, allowing three runs on three hits and a walk.

“We expected him to go five innings,” Astros manager A.J. Hinch said Friday. “It certainly caused him to come home. It’s unfortunate that he had a little setback. He didn’t finish his outing, so we’re certainly disappointed for him”

After leaving the rehab outing early, McHugh was sent back to Houston to be re-evaluated by team doctors. The righty has now been diagnosed with a posterior impingement of his right elbow. At this point, the Astros don’t believe McHugh will require surgery, as an MRI revealed no structural damage to McHugh’s elbow. However, he will refrain from throwing for the next six weeks, at which point he’ll be re-evaluated.

Aside from a fingernail issue that kept him out for a couple weeks in 2014, McHugh has remained healthy since coming to Houston prior to the 2014 season. He’s undoubtedly been one of the team’s most consistent pitchers over the last three seasons and heading into this year, the Astros were counting on him being one of the leaders atop their rotation alongside Dallas Keuchel.

Fortunately for the Astros, they entered the season with a fair amount of rotation depth, and so they’ve managed to survive the first time through the rotation without McHugh. Of course, they were expecting to have him back sometime next week, and so Houston’s long-term rotation plans for the season will be forced to change.

Currently, veterans Mike Fiers and Charlie Morton are holding down the back end of the rotation alongside youngster Joe Musgrove. All three were solid in their first start of the season this past week, although none of them ended up getting a win. Barring another injury, the Astros should be able to carry on with those three, Keuchel, and Lance McCullers as their five starters for the time being. Houston should be in good shape with those five, especially after Keuchel tossed seven shutout innings on opening day, as he looks to re-establish himself as the team’s ace following a down year in 2016.

Nevertheless, the Astros were counting on McHugh being an important part of their rotation this season. He’s shown in the past that he’s capable of being a front-of-the-rotation caliber starter, something only Keuchel has proven among the team’s current starters, although there are high hopes for McCullers. At the moment, the Astros appear to have the depth to survive the loss of McHugh for a couple months, but it wouldn’t be a surprise to see them feeling the effects of his absence at some point.