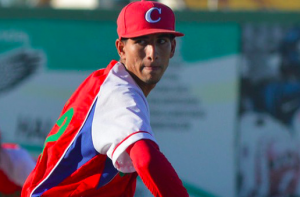 For the second time this year, the Houston Astros have agreed to sign one of the top Cuban free agents available. Earlier this year, the Astros signed third baseman Yulieski Gurriel, who is now helping with their late-season playoff push. The Astros have now agreed to terms with left-handed pitching prospect Cionel Perez. Houston agreed to sign the 20-year old southpaw for $5.15 million.

MLB.com ranks Perez as the fourth best international prospect available in 2016. Among the top 30 on that list, only Perez and a few other players from Cuba are yet to sign with a major league club. In addition to the Astros, the Reds, Orioles, and Padres also showed strong interest in signing Perez.

Perez is a little undersized, being listed at 5’11” and 170 lbs. However, scouts believe he has a chance to add 25 lbs. to his frame. Recent reports have his fastball sitting in the low 90s, but as he puts on more weight his velocity figures to increase into the mid 90s, ultimately making his fastball a borderline-plus pitch. His best secondary pitch is his slider, which has shown flashes of being an above-average pitch, but is still in need of work. Perez also added a changeup to his repertoire recently, although it remains to be seen how close that pitch is to being a viable major league offering.

During the 2014-15 season in Cuba’s baseball league, Perez posted a 2.06 ERA across 17 starts, striking out 76 in 87.1 innings of work, emerging as one of the country’s best pitchers at a young age. Some have compared him Texas Rangers lefty Cole Hamels in terms of where he is in his development right now, although he obviously has a long way to go to reach that level.

Many scouts believe Perez has the athleticism to continue to develop into an effective major league pitcher. They project that he’ll ultimately develop into a mid-rotation starter, despite his small size. At the very least, most believe Perez will become a hard-throwing reliever with late-game potential.

Still being just 20 years old, Perez is likely to begin the 2017 in A-ball, although it’s possible he could start his minor league career a little higher up the ladder considering the recent progress many scouts have reported. Either way, the Astros have added one of the top international free agents available to a farm system that already includes six prospects listed among MLB.com’s top 100, making their future a little brighter.