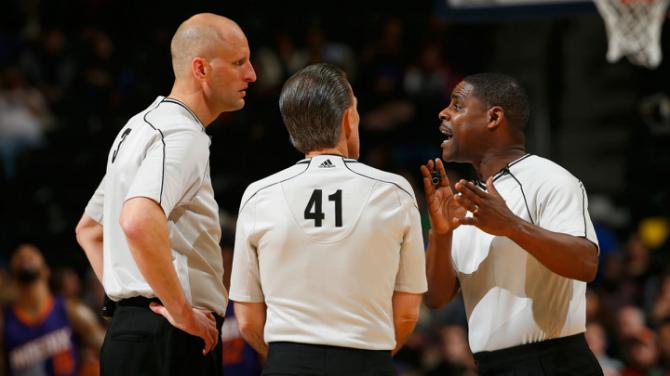 For sports fans, the only thing more frustrating than losing a game is thinking that an erroneous call impacted their team’s fate down the stretch. Thinking it and knowing it are two different things, but thanks to the NBA’s Last To Minute Report that is no longer the case.

In the report, the NBA puts a spotlight on the mistakes the league office feels the referees made in the final two minutes of the game of games that are within five points at the two-minute mark or go into overtime.

They don’t care about messed up calls in the other 46 minutes of the game nor do they care about missed calls in blowout games; just when the game is close, and a blown call could have a severe impact on the outcome.

The refs are not happy with the reports, and many fans are not pleased either and with very good reason. No useful purpose is served by printing these reports other than verifying a game was decided by the refs and not by the better team.

These reports give fans a real reason to be angry about losing—but commissioner Adam Silver doesn’t see it that way.

“Of course, it doesn’t change the outcome of a game that was already played, but accountability on behalf of the league office is critical, just as it is with all league and businesses,” Silver said during an interview during Game Three of the NBA Finals. “And more importantly, that fans have a right to know that the games are being called consistently.”

What the NBA failed to realize in printing these reports is that the only thing people care about is mistakes. They love to blame someone else whenever they can. It’s much easier than accepting defeat. So the fans and media could care less about the refs getting 95.7 percent of whistled calls correct during the playoffs and 88.6 percent on all plays (including non-calls).

Good intentions are great, but the NBA has only succeeded in highlighting the mistakes the refs make—just like Tyron Lue did after Game Four:

“He [LeBron James] never gets calls,” Lue said Friday after the game. “I mean, he attacks. Outside of Russell Westbrook, he’s one of the guys that attacks the paint every single play. And he doesn’t get a fair whistle all the time because of his strength and because of his power and guys bounce off of him. But those are still fouls, and we weren’t able to get them. But we’ve got to play through officiating.”

So the league office can be critical of the refs, but coaches and players can’t? Can the league be more hypocritical?

Maybe the league sees Lue’s comments like it did Draymond Green’s nut shot against LeBron James towards the end of Game Four.

The refs called a foul on Green for appearing to take a swing at James’ family jewels after James stepped over him, but didn’t call it a flagrant. The league decided it looked intentional, so they changed the call two days later to a flagrant one. Since it was his fourth of the postseason, it earned him a one-game suspension.

The league doesn’t mean to be critical of the refs with these reports. They think they are giving the fans what they want—a transparent league that admits its mistakes. The criticism is an unfortunate by-product of the reports. Lue’s comments were intended to be critical and nothing else.

Does that mean the NBA is right to fine Lue for essentially doing what they do with their two-minute reports?

Absolutely not. It’s still hypocritical. It doesn’t matter what purpose the league intended the reports to have; just the purpose that they have served.