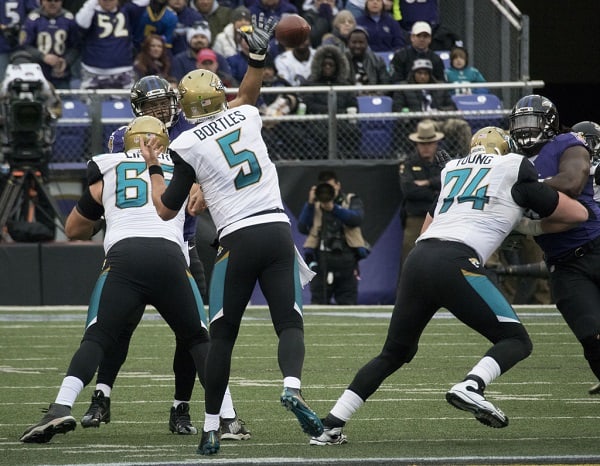 The 2016 NFL season’s first three weeks are in the books, which means it’s time to look at Week 4’s picks against the spread. Early Sunday morning, we have an overseas matchup in London between the Indianapolis Colts and Jacksonville Jaguars. Who has the best odds in this one?

Ah, the first London game of the season. These are always tough one to calls, which is why I’m here to help. The Colts and Jaguars are playing each other for the first of two times this season, and the Jags are losing a home game this year to play at Wimbley. Now, that can be viewed as a negative by some, but for Jacksonville, it may not be so bad.

The Jaguars are becoming pros at playing overseas. This is their fourth year in a row playing a game in London, and despite an 0-3 start, this is probably the best roster they’ve had thus far.

After struggling the first two trips to the U.K. (losing to a then-very talented San Francisco 49ers team in 2013 and Dallas Cowboys squad in 2014), the Jags were able to stop the Buffalo Bills last season, winning 34-31. Maybe that isn’t the greatest vote of confidence, as the Bills were starting E.J. Manuel in that game after Tyrod Taylor got hurt, but it’s still a good sign.

The best advantage that the Jags may have in this one, though, is that the Indianapolis Colts have never played a game in London. It’s a brand new experience for them, which is ultimately going to make this a tough situation to prepare for. Not only did they have to travel nearly 4,000 miles (undoubtedly the longest flight these players have experienced in the NFL), but that time zone change is going to be a struggle. They’re used to playing at 1:00 p.m. ET or later, and now this will feel like an early-morning game. That’s going to be a major disadvantage for them, while potentially playing right into the Jags’ hands.

Another motivation for Jacksonville is certainly that they’re 0-3 to start a season that had a ton of promise. The defense was bulked up this offseason through the draft and free agency, and the offense was ahead of schedule last year as their two stud receivers emerged.

So, can they get things going against this Colts team?

Indy has also had their struggles so far this year. They still can’t protect Andrew Luck, and that defense hasn’t improved at all.

Overall, they’re not much better than Jacksonville starting the year 1-2, losing to the Detroit Lions and Denver Broncos while defeating the San Diego Chargers at home last weekend. If the Jags are going to fulfill any of the promise they began the season with, this is a must-win for them against the Colts.

Bets to Make: take the points in this one. Jacksonville has seemingly all the advantages in this one, and there would appear to be too much talent on that roster to not start winning games eventually. Given their familiarity with London and the time change because of the past few years, it’ll give them the edge in this one. Also, take the over. While the Jags will likely win, both teams should be able to score points.