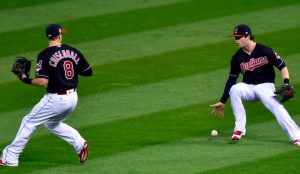 The Cleveland Indians welcomed outfielder Lonnie Chisenhall back from the DL on Thursday. Chisenhall, the team’s primary right fielder last season during their World Series run, began the season on the DL after hurting his shoulder while colliding with an outfield wall late in spring training. Chisenhall is no doubt a welcomed addition to the Indians, who are just 4-4 early in the season. However, Chisenhall was activated at the expense of Tyler Naquin, has been optioned to triple-A to make room on the active roster for Chisenhall.

Despite a sluggish start to the season, Naquin had an outstanding rookie year for the Indians in 2016. He hit .296 with a .886 OPS and finished third behind only Michael Fulmer of the Tigers and Yankees catcher Gary Sanchez for American League Rookie Year. For all intents and purpose, Naquin appeared to be Cleveland’s primary center fielder heading into 2017. However, with Chisenhall coming back, the team decided to keep Abraham Almonte rather than Naquin, a decision that raises a few eyebrows.

“It was something that, when I say we stressed over it, I mean it was a lot,” Indians manager Terry Francona said of the choice to send Naquin to triple-A. “I think for where we are now, with (Michael Brantley) maybe not quite ready to play every day, having the switch-hitter (Almonte) is really helpful.”

An outfield of Brantley, Naquin, and Chisenhall would have given the Indians three left-handed hitters in their outfield, which is obviously not ideal, particularly during games in which Cleveland faces a left-handed starter. However, Austin Jackson and Brandon Guyer are capable of balancing out Cleveland’s outfield with right-handed hitters, even if Almonte isn’t an option. In theory, one one of Brantley, Naquin, and Chisenhall would have to start against a lefty, which is generally acceptable.

Nevertheless, with Naquin getting off to a slow start this year, the Indians decided to send him back to triple-A, despite having little left to prove at the minor league level. For Cleveland, it appears to come down to not being able to guarantee Naquin enough playing time.

“I don’t think coming off the bench necessarily suits Naquin right now,” Francona said. “Nobody’s giving up on him being an everyday player. We talked about a lot of stuff, and we’re trying to get back to that guy that we saw in May and June and July last year. I thought he showed a lot of maturity because we knew this was going to be a hard one for him.”

Almonte and Jackson can both play center field, but if the Indians want to get Chisenhall’s bat in the lineup every day, they may have to live with him playing center field. Even Francona admitted on Thursday that he’s not sure how Chisenhall will fair in center field.

“We’ll see where it goes,” Francona said. “I don’t think we have to be tied to anything. It may help us defensively and he can always play right. So we’ll see.”

It was definitely surprising to see the Indians send down Naquin, as Almonte only made Cleveland’s opening day roster because of the injury to Chisenhall. While Almonte has gotten off to a good start, he’s never put up the kinds of numbers that Naquin did last season. It’s now unclear how long the Indians intend to keep Naquin in the minors and how they’ll orchestrate playing time in the outfield now that their primary center fielder is being stashed in the minors.