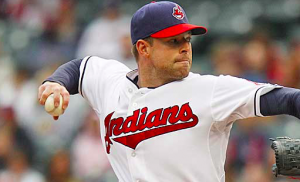 After winning Games 1 and 2 of the ALCS behind excellent pitching, the Cleveland Indians are still undecided on how they’ll proceed with their rotation following Trevor Bauer’s scheduled start in Game 3 on Monday. However, one option that remains a distinct possibility is Corey Kluber starting Game 4 on short rest. Kluber has been the undisputed ace of Cleveland’s staff during the postseason, throwing 13.1 scoreless innings, including 6.2 shutout innings against the Toronto Blue Jays in Game 1.

With Carlos Carrasco and Danny Salazar both unavailable due to injury, Cleveland’s rotation has far less depth than they expected to have a month ago, putting more pressure on Kluber to carry the pitching staff, and he has certainly delivered. Josh Tomlin has also stepped up, rebounding from a demotion to the bullpen early September and delivering two outstanding performances in the playoffs, including Saturday’s Game 2 against the Blue Jays.

Cleveland was also thrown for a loop when Trevor Bauer cut his finger while doing maintenance on his drone. Bauer is expected to be fine, but as a precaution, the Indians flip-flopped him and Tomlin, so now Bauer is expected to start Game 3 on Monday night in Toronto. While Bauer should be good to go in Game 3, the Indians have no obvious option in their rotation behind him, Tomlin, and Kluber.

Cleveland manager Terry Francona appears to have three options for Game 4. The first is Mike Clevinger, who started 10 games this season but was far more effective as a reliever. He also hasn’t pitched in the postseason, so how much stamina he has to go deep into a game is uncertain. The second is left-handed rookie Ryan Merritt, who made three relief appearances and one start for the Indians this season after starting 24 games at triple-A. In 11 big league innings, Merritt has a 1.64 ERA. The final option for Francona is bringing Kluber back on short rest.

Francona says he has discussed the options with his coaching staff, but no decision has been made. “I think there are some options for us moving forward,” Francona said Saturday before Game 2. “The one thing we don’t want is to make a decision that we think puts our team in a good spot if the pitchers don’t feel that way. So we’ll keep communicating with them, and we’ll do what we think is in our best interest. But it can’t just be for one game, because there’s always a trickle-down effect.”

Kluber has never pitched on short rest in his big league career, but he seems to be on board with the idea. “I think we’re at the point in the year where anybody is going to do anything they can to help the team win,” Kluber says. “If that means starting on short rest, pitching out of the bullpen on short rest, if it comes down to it and that’s what the team needs to get a win, then I’m all for it.”

The Indians have not yet decided how they’ll approach Game 4, although the fact that they won Game 2 and will be assured of a series lead heading into Game 4 could allow them to be a little more conservative. That being said, it would not be a huge surprise if they choose to start Kluber in Game 4 on short rest.