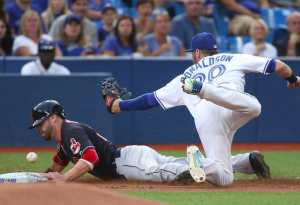 We are in store for one heck of an ALCS, which gets underway Friday in Cleveland. Both the Cleveland Indians and Toronto Blue Jays are undefeated in the postseason thus far, so one of them will suffer their first loss of the playoffs on Friday night. Fan bases in both cities have waited a long time to see their team on the verge of the World Series, and so this should be an electric and emotionally charged series from the start.

These two teams met seven times during the regular season, with the Indians winning four and the Blue Jays taking three. Of course, it’s been close to two months since they last saw each other, so how relevant those games are now remains to be seen. It’s pertinent to note that four of those seven games were decided by one run, with the Indians taking three of those four games, which could indicate a tight series. It could also indicate that the Indians are more adept at winning close games than the Blue Jays, something that could become important in Game 1.

After tossing a gem against the Boston Red Sox in the ALDS, the Indians will look to Corey Kluber to do the same in Game 1 of the ALCS. Kluber was fantastic in his first ever postseason start, and the Red Sox lineup he faced is no less dangerous than the Toronto lineup he’ll face Friday night, so there’s every chance he’ll be able to keep the Blue Jays in check. Of course, when Kluber faced the Blue Jays in early July, he was knocked out in the 4th inning after giving up five runs. However, he did give up just two runs over 6.2 innings when he faced them again in August, so he should have the confidence that he can keep Toronto’s power hitters under wraps.

Meanwhile, the Blue Jays will send Marcos Estrada to the mound in Game 1. Estrada is fresh off 8.1 brilliant innings against the Texas Rangers in Game 1 of the ALDS. In 33.2 career postseason innings, Estrada has a 2.67 ERA, so that start against the Rangers was no fluke, and the Blue Jays will be confident he can continue his playoff success Friday against the Indians. When he faced the Indians in July, Estrada was solid if unspectacular, striking out seven over five innings, but giving up two home runs.

The biggest X-factor in Game 1 of the ALCS may be Cleveland’s ability to hit for power. Remember, Game 1 of the ALDS was defined by both the Indians and Red Sox hitting three home runs each. The Blue Jays have already hit 10 home runs in four postseason games, so there’s no doubt that Toronto is capable of playing long ball. However, there’s no guarantee that the Indians can do the same, especially after Mike Napoli and Carlos Santana struggled to get going during the ALDS. If Kluber and the rest of Cleveland’s pitching staff can’t keep the Blue Jays from hitting home runs, the Indians may have to match that power in order to take Game 1.

As the home team, the Indians are slight favorites to win Game 1. It also doesn’t hurt to have Kluber on the mound coming off his exceptional start in the ALDS. On paper, this could be one of the only games in this series that becomes a pitchers duel, so expect scoring to be hard to come by. In a low-scoring game, the team with more speed and a better approach at the plate will be able to grind out a win, and that’s the Indians. Cleveland wins 3-2.