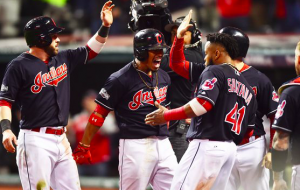 Francisco Lindor played the role of hero in Game 1 of the ALCS between the Cleveland Indians and Toronto Blue Jays. His home run provided the only two runs of the game, as the Indians took an early series lead. Of course, there’s little time to enjoy the win, as the Indians and Blue Jays will be back on the field Saturday afternoon in Game 2.

Wow. That’s just about all that can be said for Cleveland’s pitching performance against the Blue Jays in Game 1. Toronto scored 27 runs in its first four postseason games, but they were shut out in Game 1 of the ALCS. The Blue Jays had scoring opportunities early, but failed to capitalize, and late in the game they couldn’t get much going offensively, as Cleveland’s bullpen slammed the door shut.

From Cleveland’s perspective, Game 1 went exactly according to plan. Corey Kluber was once again fantastic, as he’s now provided 13.1 scoreless innings in the postseason. Andrew Miller and Cody Allen then combined for the final eight outs of the game, stifling Toronto’s powerful lineup. Of course, whether the Indians can continue to get quality starts and set up their bullpen perfectly remains to be seen. The rotation depth behind Kluber is a concern, and the Indians may have to worry about asking too much from Miller and Allen.

With Trevor Bauer being pushed back due to a non-baseball injury, Josh Tomlin gets bumped up to Game 2 for the Indians. Tomlin gave Cleveland a solid outing against the Red Sox in the ALDS, allowing two runs over five innings, and they’d gladly take a similar outing against the Blue Jays on Saturday. When he faced the Blue Jays in early July, Tomlin allowed one run over six innings, striking out eight. Between that outing and Tomlin’s strong finish to the regular season, the Indians should feel good about their chances of getting a quality start from Tomlin in Game 2.

The Blue Jays are hoping to get the same from J.A. Happ, who allowed one run in five innings against the Texas Rangers in the ALDS, but played with fire a little bit, scattering nine hits. The Indians have several switch-hitters, and so Happ should expect to face mostly right-handed hitters on Saturday, which won’t make things easy on him. However, in an outing against the Indians in July, Happ struck out 11 while allowing just one run over seven innings. He faced many of the same hitters he’ll face in Game 2, so his confidence level should be high heading into Saturday’s start.

The weather in Cleveland may become an X-factor in Game 2. Prior to the ALCS, the Blue Jays played two games in Texas in rather warm weather and two games at home, where the conditions can be controlled. Friday’s Game 1 was Toronto’s first taste of cold weather in October, and it may have played a role in the Blue Jays struggling offensively. It should be a little warmer in Cleveland on Saturday afternoon than it was on Friday evening, and that could help Toronto’s bats to warm up. Of course, in an afternoon game, the shadows can often be of assistance to the pitchers.

Despite losing Game 1 and being the road team, the Blue Jays are slight favorites in Game 2, with Happ likely being the reason for Toronto getting the edge. Both starting pitchers should have a good game, but it’s difficult to envision the Blue Jays being shut out on two consecutive days. Eventually, the Blue Jays will have a breakthrough, and in Game 2 it’ll be the Toronto bullpen’s turn to close out a lead in the late innings. Toronto wins 4-2.