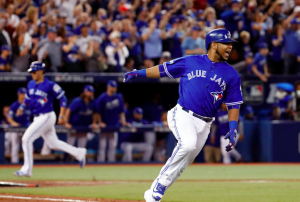 With their backs firmly against the wall, the Toronto Blue Jays have stayed alive in the ALCS following their 5-1 win over the Cleveland Indians in Game 4. By forcing a Game 5, the Blue Jays have gained a little bit of momentum in the series, helped out by the fact that Game 5 will be back in Toronto. The Blue Jays have also extended the series long enough to start testing Cleveland’s rotation depth, which could tip the scales back in their favor, albeit one loss away from elimination.

Breaking Out Is Hard To Do

In only took four games, but Toronto’s lineup finally showed signs of life in Game 4 of the ALCS. Toronto finally scored a couple runs against Indians ace Corey Kluber, and also managed to do some damage against Cleveland’s middle relievers. Obviously, the Blue Jays aren’t clicking on all cylinders just yet, but five runs on nine hits in Game 4 does give them hope that they can keep it going the rest of the series. Toronto also doesn’t have to worry about seeing Kluber again until Game 7, and so with a little confidence, perhaps the Blue Jays can continue to beat up against some lesser pitchers and avoid having to see Andrew Miller and Cody Allen late in the game while trying to come from behind.

In their second straight elimination game, the Blue Jays will send Marco Estrada to the hill, hoping to send the series back to Cleveland. In two postseason starts, Estrada has totaled 16.1 innings, allowing just three runs on 10 hits over that span, so despite taking the loss in Game 1 against the Indians, he’s the guy the Blue Jays want pitching with their backs against the wall. In Game 1 against Cleveland, he made just one mistake to Francisco Lindor, but other than that, he was close to perfect and should have another good outing against the Indians in Game 5.

Meanwhile, with a depleted rotation, the Indians will be forced to send rookie Ryan Merritt to the mound to start Game 5. Merritt spent most of the season in triple-A, where he posted a 3.70 ERA in 24 starts. He has just one career start and three relief appearances in the big leagues. The southpaw does not have overpowering stuff, and so he will have to locate his pitches, particularly his secondary pitches, if he’s going to contain Toronto’s lineup. The Blue Jays have a right-handed heavy lineup, which could work in their favor against the young lefty.

With the Blue Jays showing signs of life offensively and the Indians starting a young pitcher, Cleveland may have to win a slugfest if they hope to close out the series in Game 5. This makes power hitters like Carlos Santana and Mike Napoli the X-factors in Game 5. Unfortunately, both have struggled in the ALCS, as has Jason Kipnis, who is Cleveland’s third best power threat behind Santana and Napoli. If the Blue Jays start playing long ball, the Indians may have to match that power to have a chance to close out the series and advance to the World Series, meaning Santana, Napoli, and Kipnis may need to combine for at least a couple home runs.

With Estrada on the mound against an unproven rookie, the Blue Jays are the obvious betting favorites for Game 5. Merritt being able to contain Toronto’s lineup seems unlikely, and the Indians would be thrilled to get just four or five innings out of him. Cleveland has done some surprising things during the postseason, but scoring more than a couple runs off Estrada and having a rookie hold the Blue Jays in check still feels unrealistic. This series is heading back to Cleveland. Toronto wins 7-1.