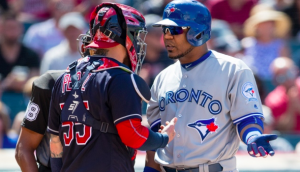 In a rather unlikely turn of events, both the Toronto Blue Jays and Cleveland Indians swept their opponents in the ALDS despite both teams being considered by most to be underdogs in their respective series. Nevertheless, that is the matchup we have for the ALCS, and based on their performance in the divisional round, both teams are well deserving of a spot in the League Championship Series. So, how do these two teams matchup against one another?

This is a tough call, as the Indians were a little better offensively during the regular season, but the Blue Jays have brought the lumber to the postseason and have displayed impressive amounts of power. The trio of Josh Donaldson, Edwin Encarnacion, and Troy Tulowitzki in the middle of the order has been exceptional, while Ezekiel Carrera has emerged almost out of nowhere to become an important part of the lineup. However, outside of a couple of home runs from Jose Bautista, the rest of the lineup hasn’t done much, leaving it up to Donaldson, Encarnacion, Tulowitzki, and Carrera to carry the load, which has the potential to become problematic.

Meanwhile, the Indians get a slight edge in this area because they have a little more depth and versatility in their lineup. Jose Ramirez and Jason Kipnis have stood out the most, but nearly everyone in the lineup has found a way to contribute, including those coming off the bench or playing part-time roles. In fact, Mike Napoli and Carlos Santana have struggled the most out of Cleveland’s regulars, and the Indians still scored enough runs to sweep the Boston Red Sox. If those two get going in the ALCS, the Indians could really start clicking offensively. Toronto has a clear advantage in terms of power, but Cleveland’s depth and versatility allows them to score runs in a variety of ways, not just via the home run, giving them a slight edge offensively.

These teams had the two best starting rotations in the American League during the regular season, but with the injuries to Carlos Carrasco and Danny Salazar, the Blue Jays now have the edge. Obviously, Cleveland had some guys step up in the ALDS, with Corey Kluber pitching a gem. However, the Indians could lack the depth to survive a seven-game series. They’ll get Kluber for two games, but expecting Trevor Bauer and Josh Tomlin to give two quality performances against Toronto’s lineup could be asking too much. On top of that, giving a start to Mike Clevinger at some point could also be problematic for Cleveland.

As for the Blue Jays, they should feel comfortable with all four of their starting pitchers. Aaron Sanchez struggled the most in the ALDS, but he’s too good not to rebound from a poor start against the Texas Rangers. J.A. Happ wasn’t great either, but he managed to deliver a solid start against a strong Texas lineup and should be fine the next time around. Marco Estrada and Marcus Stroman both delivered strong performances, and both should have enough playoff experience to handle themselves in the ALCS. The Blue Jays have few concerns when it comes to their rotation, giving them a clear edge over Cleveland.

The Indians had one of the best bullpens in the American League during the regular season, and that unit has continued to perform in the postseason. Closer Cody Allen has gotten into some trouble, but he pitched three shutout innings against the Red Sox, while Andrew Miller may be Cleveland’s most valuable pitcher at this point in the season, as he’s capable of pitching at any stage in the game and giving multiple innings. Whether the Indians have the depth necessary beyond those two guys is still up for debate, but Allen and Miller have what it takes to close out games, and between the two of them, they can give the Indians close to nine outs in a game if necessary.

To be fair, Toronto’s bullpen has also performed well in the postseason. Roberto Osuna has not missed a beat since leaving the wild card game with a shoulder issue, while both Jason Grilli and Joe Biagini have come up big for the Blue Jays, providing quality innings. Toronto’s bullpen has been just as good as Cleveland’s during the postseason, but based on track throughout the entire season, the Indians have an edge in this department.

In barely a week, the Blue Jays have gone from a wild card team to favorites in the ALCS, and for good reason. Toronto has excelled in nearly all phases of the game during its four postseason games, all wins, and should definitely be considered favorites over the Indians.

The biggest difference between these teams is in rotation depth. The Blue Jays feel good about any four of their starters taking the mound, while the Indians have reason to worry about any game not being started by Kluber, especially against Toronto’s powerful lineup. The Blue Jays have also pitched great out of the bullpen during the postseason, making one think that those performances can continue. Finally, the Blue Jays offer so much power offensively. Relying on the long ball this time of year can be like playing with fire, but Toronto has so many players that can hit home runs that you always think someone is going to come through.

The Indians have a genuine chance to win this series, so don’t think that the Blue Jays will win easily. However, Cleveland’s starting pitching just doesn’t have the depth to handle Toronto’s lineup for a full series. At some point, the Blue Jays will break out offensively, and even if they don’t, Toronto also has the pitching to win close games. The blue Jays will ultimately take this series in six games and return to the World Series for the first time since 1993