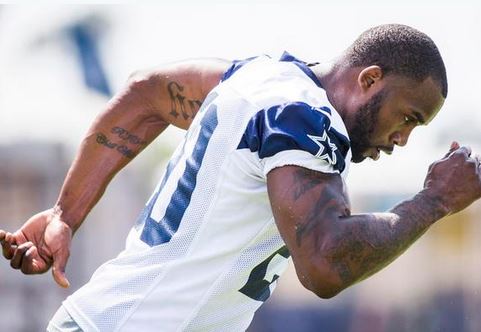 The Dallas Cowboys are expecting fans to believe a pretty far-fetched story concerning running back Darren McFadden. He is supposed to be out through training camp (maybe more) after suffering a fractured elbow because he dropped his cell phone and tried to save it.

The incident supposedly happened over Memorial Weekend at home during a family cookout. He still practiced the following week, but the fracture wasn’t discovered until he had an X-ray as part of a physical.

When the Dallas Cowboys acquired former Oakland Raiders running back Darren McFadden they hoped they were giving a talented running back a chance he had yet to have—to be a part of an offense that has a stellar passing attack and an offensive line most running backs would love to run behind.

Maybe then he could finally live up to the expectations most people had for him when he was taken with the No. 4 pick in the 2008 draft.

To be fair, he didn’t do half bad. With Tony Romo out for the season, he had to deal with defenses that were stacked against the run—and he still rushed for 1089 yards (fourth in the league).

Dallas ended up taking Ohio State workhorse Ezekiel Elliot in the draft, but the plan was to have McFadden start as the team eased Elliot into the rotation along with former Washington Redskins running back Alfred Morris.

Now, McFadden might be lucky if he sees the field in anything other than garbage time. Elliot and Morris will be splitting the first-team reps during training camp and the preseason. If Morris regains his form or if Elliot proves the team was right in taking him with the No. 4 pick there will be little reason for the Cowboys to rush McFadden onto the field.

So he might have just blown his best chance to show that he can be even better than he was last season—and all because he had to save his cell phone?

Does anyone actually buy that?

Here we have a professional football player; a guy who relies on keeping his body healthy to make a living. Some guys will still take stupid risks by doing things like play with fireworks, but typically guys do what they can to make sure their bodies are in tip top shape.

That could also be why he thought he could save his brand new cell phone from hitting the ground if he dove for it—but let’s think about that for a moment.

Over the course of his career, he has made over $46 million. Assuming his agent took the max allowed (three percent) he still has over $44 million. According to recent news reports, his former business manager cheated him out of $15 million.

That still leaves him with $29 million in career earnings with as much as $2.15 million coming to him this season.

With that kind of money in the bank is someone really going to worry about dropping a $700 phone?

Let’s assume he’s broke and only has the $1.15 million he made last season. Would you really risk personal injury by diving onto the hard floor (and it had to be pretty hard for his elbow to fracture when it hit) so that you don’t scratch your cell phone?

The desire to save his phone is something we can all understand, but for the blow his elbow took to do the damage that it did, it must have been a heck of a dive. He had to have landed with all his weight on his elbow too. Pretty much anything that could go wrong must have.

Guys have suffered injuries in ridiculous fashion before making the scenario believable, but it would not be shocking to find out eventually the damage was caused by something else altogether.