Is There Any Chance Kevin Durant And The Warriors Live Up To Expectations Next Season? 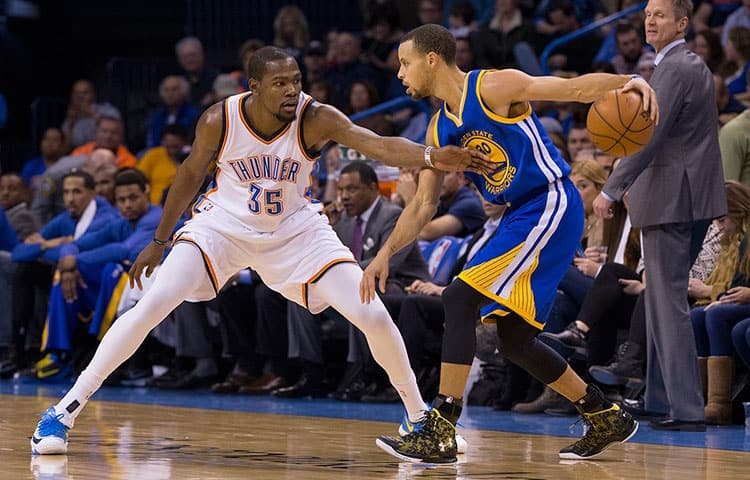 The NBA Finals showed Golden State Warriors fans one thing they didn’t want to know. If the Splash Brothers, Steph Curry and Klay Thompson, get taken out of the equation they can be beaten.

When the team had someone else that could produce—like Shaun Livingston in Game One of the Finals and Draymond Green in Game Two–it still won. However, if no one stepped up to fill the void the superhuman team that won 73-games during the regular season suddenly became very mortal.

So when free agency started, the Warriors front office set out to correct that problem—and correct it they did with the guy that very nearly led the Oklahoma City Thunder to victory against them in the Western Conference Finals.

Early Monday afternoon, Durant made his decision to leave Oklahoma City for Golden State public. He was immediately met with a lot of criticism, videos of Thunder fans burning his jersey appeared online, and even one with three guys firing assault rifles at one.

At the same time, many fans and pundits did not get emotional. They just looked at what was being created and appreciated it for its potential. You now had the winner of the last three league MVPs on the same roster. Should one of the Warriors shooters have an off night, the other two can pick up the sack. If two have an off night (or get taken out of the game), the other should be in a position to go nuts.

The team is as loaded as a team can get. Curry, Thompson, and Durant are all still relatively young, so there is not going to be a letdown anytime soon. Barring catastrophic injury, there is no reason to think anyone’s skills are going to diminish anytime soon.

So basically, much like the last off-season, the talk is going to be about the Golden State Warriors winning the Finals next year. Not just win, but dominate. Some are already calling the win total Vegas is predicting for the Warriors (68) too low. Some are going as far as to say they could set a new single-season win record next year.

Is it safe to say there is a little pressure on Durant and his new team? Many will say the Warriors are accustomed to the spotlight and the pressure. While that may be true, no one has ever had a brighter one on them then the Warriors will have next season.

So—what will be considered a good season for them? 60 wins? Or will that be a letdown?

Then there’s the postseason.  If they are not the No. 1 seed will that be a letdown? If they don’t sweep whoever they play in the first round will something be wrong? What if they lose in the Finals or—heaven forbid—they don’t even make it?

The expectations are already sky high, and Durant isn’t even officially part of the team yet. Some will try to downplay the expectation talk, but they will be drowned out by all those who hate it when the stars form superteams.

Can they live up to the expectations? Only if they can win 75 games and sweep every round of the postseason.