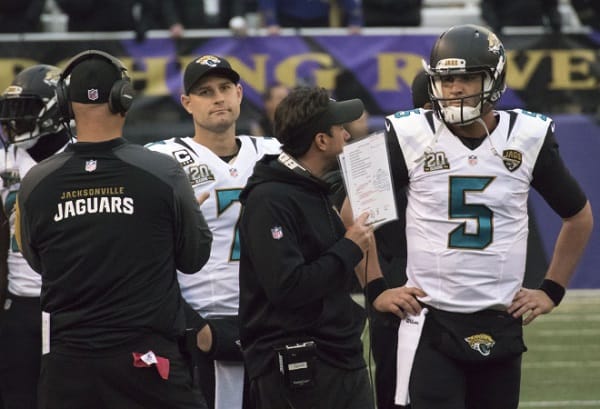 The 2016 NFL season’s opening week is in the books, which means it’s time to look at Week 2’s picks against the spread. Sunday afternoon, we have a cross-country AFC matchup as the Jacksonville Jaguars travel over 2,300 miles to take on the San Diego Chargers. Who has the best odds in this one?

That said, this game may not end up being that close.

Now, both the Chargers and Jaguars improved over the offseason.

San Diego was set to have half of their offensive line and star receiver back from injuries — that is, until disaster struck in Week 1 again for Keenan Allen. He tore his ACL, less than one year after having his kidney lacerated. That’s just bad luck, which continues to be San Diego’s biggest issue. The injury bug has hit them hard last year and already in 2016. The defense isn’t all that much to look at, especially after losing Eric Weddle in free agency, but this offense was supposed to keep them respectable. Without Allen, is that possible?

Meanwhile, the Jags had a heck of a draft and free-agency period. They signed the best defensive lineman on the market in Malik Jackson, and then went on to draft stud defensive back Jalen Ramsey and, somehow, Myles Jack in the second round. But that wasn’t all; they also signed Tashaun Gipson, Prince Amukamara and Jared Odrick.

Suffice it to say, the Jags bolstered a weak defense in a huge way, and it showed in Week 1. Aaron Rodgers and the Green Bay Packers were held to under 300 yards of total offense. Sure, they scored 27 points against Jacksonville, but that is still a considerable improvement for this defense in only the first week of the season.

Once the offense gets rolling with Blake Bortles, Allen Robinson, Allen Hurns and Julius Thomas in the passing game — and the 1-2 punch of T.J. Yeldon and Chris Ivory in the running game — this Jags team has a legitimate shot at the playoffs this year.

To be frank, if this game was in Jacksonville rather than San Diego, I’d expect a full-blown blowout by the Jags. But, it is in San Diego, and that’s quite a few time zones for Jacksonville to travel. That’ll make it a little closer, but they shouldn’t have too much trouble improving to 1-1.

Bets to Make: Take the points, as the Chargers are going to struggle keeping up with Jacksonville’s offense in this one. San Diego’s defense isn’t at the level that Green Bay’s is, and they’ll fail to maintain Robinson and Hurns in this one. Also, take the over; it’s going to be tougher for the Chargers to score without Allen, but Philip Rivers is used to it, and at least the offensive line is still healthy … for now.