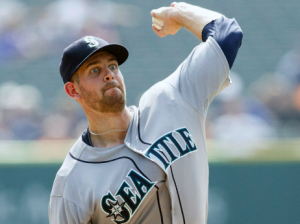 Felix Hernandez may have some competition as the ace of the Seattle Mariners, and it’s lefty James Paxton. The 28-year old southpaw has started the 2017 season with 21 shutout innings, including eight scoreless in a much-needed win over the Texas Rangers Saturday night. After showing flashes of what he’s capable of doing over the last three seasons, Paxton may finally be ready to break out and challenge Hernandez for the role of Seattle’s ace.

“I can’t say enough about what Pax did tonight and the start that he’s off to this year,” Mariners manager Scott Servais said after Saturday’s win over Texas. “I had a feeling that this could kind of be his breakout year after what we saw last year. He had that stretch of 10, 12 starts there at the end of the season and he’s just continued to build off that and grow.”

Paxton has thrown at least six scoreless innings in each of his first three starts of the seasons, giving up four or few hits in each start. He’s the first major leaguer to do that to start a season since 1914. Paxton has also struck out 22 and allowed just 12 base runners in his first 21 innings, otherwise known as total dominance.

His best start was Saturday against the Rangers, in which he threw eight shutout innings, giving up just two hits and one walk. He carried a no-hitter into the 6th inning.

“I think that Paxton threw the ball extremely well against us tonight,” Rangers manager Jeff Banister said after Seattle’s 5-0 win on Saturday. “He kept it in tight to our hitters, was able to expand when he got ahead, he used the breaking pitch and the changeup to keep us off balance, he played the up-fastball game very well tonight, and he landed a lot of pitches and made it extremely challenging for us tonight.”

The results have been fantastic for Paxton this season, but he says he’s not doing anything different from what he’s done in the past.

“I’m just going out there and giving everything I got,” Paxton said after Saturday’s game with a grin. “Well, I just found a better way to do it better, I guess.”

However, Paxton’s teammates have noticed a change in his performance from last year. They now feel confident in winning any game that he starts.

“The way Paxton was throwing, you felt like if we get one run, we’ll be in good shape,” says Kyle Seager. “A run would’ve felt like three there.”

The Mariners needed a great start from Paxton on Saturday in the worst way. Even with back-to-back wins over the Rangers on Friday and Saturday, Seattle is just 4-8 on the season, with two of those four wins coming in Paxton’s starts. Overall, Seattle’s rotation has been strong, but the team’s bullpen is one of the worst in the league, and so the Mariners need their starters to go deep into games in order to win games right now.

Aside from Paxton, both Hernandez and Hisashi Iwakuma have been great at the start of the season, while the rest of the pitching staff has plenty of room for improvement. Until the Mariners see that improvement, wins will continue to be hard to come by. However, every game that Paxton starts, the Mariners feel good about their chances, as he continues to assert himself as the team’s new ace.