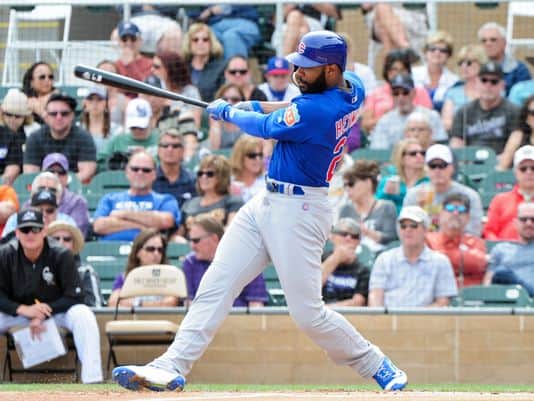 Jason Heyward injured for the Cubs while making great catch.

Chicago Cubs’ right fielder Jason Heyward made one of the most amazing catches of the 2016 season Friday night in San Francisco during his team’s 8-1 win over the Giants. But that catch could come at a price, as Heyward was hurt on the play and expected to undergo an MRI on Saturday to assess the injury.

The catch occurred on the first at bat of the game from San Francisco’s leadoff hitter Denard Span. Heyward ran down a ball deep in the right-center field gap, roughly 420 feet from home plate. He dove for the ball on the warning track and made the catch, but went smashing into the wall with his head, neck, and upper body in a way that was painful to watch. He was on the ground for a few minutes with trainers tending to him before walking off on his own power. The Cubs said after the game that his torso/abdominal area are being evaluated.

“My lower rib bone and hip bone hit each other,” Heyward explained after the game with his hip wrapped in ice. “Got pushed up against the wall, and that was it.” Regarding the spectacular catch, Herward said: “I knew I had a long way to run. I knew I had the space to make the catch. You dive and catch the ball, you try not to land on your wrist.”

It may be too soon to speculate, but based on the sight of the catch and Heyward being wrapped in ice afterwords, it may be difficult for him to avoid a trip to the DL. Despite a major league high 29 wins, the Cubs can’t afford to lose Heyward or anyone else in their outfield. Heyward has struggled offensively this year, hitting just .225, but he has been a key for the Cubs defensively.

Chicago has already lost Kyle Schwarber to a season-ending injury, forcing Jorge Soler into full-time duty in left field. Soler has struggled this year, needing two hits, including a home run, in Friday night’s game just to get his average to an even .200, as there has been some speculation that he might need to be sent to triple-A to get himself back on track. A DL stint for Heyward in addition to Schwarber’s absence and the struggles of Soler is not something the Cubs can afford right now.

If Heyward does need to go to the DL, it could coincide with the return of Matt Szczur from the DL, as he began his minor league rehab Thursday night on his way back from a hamstring injury. Szczur could at least give the Cubs three outfielders to fill out their lineup alongside Soler and Dexter Fowler without being forced to move infielders Kris Bryant or Javier Baez to the outfield. Either way, the outfield is not a place where the Cubs have a lot of depth, so they will be holding their breath during Heyward’s MRI, hoping his spectacular catch hasn’t caused a long-term injury.