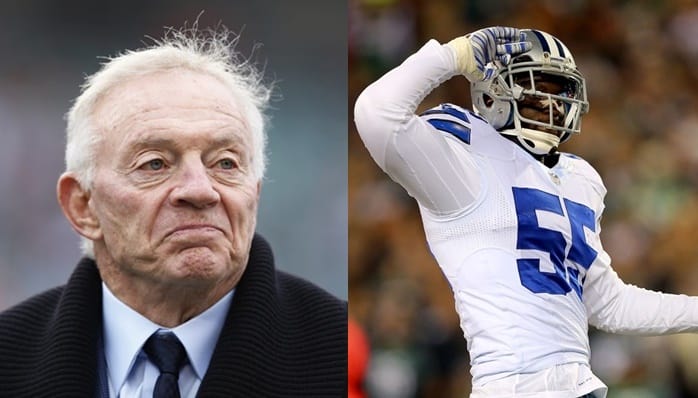 When you are the billionaire owner of a professional sports franchise, you have earned the right to do what you want. If you want to fire the head coach because the fans love him more than you, that is your right as owner. If you want to attempt to prove your football acumen by choosing guys in the draft long before the rest of the world would you can.

It’s your team. You can do what you want.

Dallas Cowboys owner Jerry Jones has been trying to prove how well he knows football for years, and it has made America’s Team into the definition of mediocrity. However, with his son in charge now, the team has been looking better and better.

But Jerry still makes his presence felt from time to time which appears to be the reason Rolando McClain still has a job.

For weeks, reports have emerged in the media that the Cowboys coaching staff is done with McClain. He missed the first four games last season because of a drug suspension. He didn’t attend any workouts during the offseason. To top it off, he’s suspended for the first ten games of the 2016 season because he didn’t learn his lesson the first time around (drug suspension).

Sounds like a no-brainer; time to get rid of him Jerry.

When the Cowboys acquired him, it looked like a no-harm, no foul kind of deal. For a sixth round pick, they acquired McClain and a seventh round pick from the Baltimore Ravens. At the time, they probably thought if he worked out—great. If he didn’t, they wouldn’t lose anything.

With Sean Lee out with an injury, why not roll the dice on a former first round pick?

As it turns out, he played great in 2014, but due to a failed drug test they lost him for the first four games of 2015. When he returned, he played well enough to warrant signing to another one-year deal, but now he’s been suspended for the first ten games of the 2016 season.

Here you have a guy with a troubled history, questionable dedication to the game, and an apparent drug issue. He has done enough to prove acquiring him was a smart move, so why hold onto him?

“The main thing is strategically, [financially], it’s not good for us,” Jones said of the potential of releasing McClain in the Fort Worth Star-Telegram, “and he doesn’t take up an active spot on the roster [during the season].”

McClain is only signed to a one-year deal worth $4 million and a $750,000 signing bonus. He doesn’t get paid while he’s suspended and he had to forfeit the signing bonus. So what on Earth is Jones talking about?

To recoup the signing bonus, the need to keep him on the roster for now. Since he doesn’t take up a roster spot while he’s on suspension, there is no harm in keeping him.

Still—he’s a malcontent. He is not another Greg Hardy or Joseph Randle, but he has some issues that should concern the team. Is holding onto him worth saving $750,000?

Perhaps the best way to answer that is to take a look at some other numbers: Jerry Jones is worth $4.2 billion. His team is worth $4 billion.

You don’t acquire that kind of wealth by blowing $750,000. Just because you have it, doesn’t mean you have to blow it.