Jerry Jones Still Trying To “Get Cute” With Cowboys At Quarterback

At this point in the season, every NFL fan base is full of hope. Until the regular season begins, everyone has the same chance of making it to the playoffs and possibly going all the way to the Super Bowl. However, in Dallas, fans are as hopeful as ever, but are also a little worried—and their team hasn’t even played a preseason game yet!

What’s the problem? Well—the injury to Kellen Moore highlighted the already precarious position the team was in at quarterback. Should Tony Romo remain healthy, the team will be okay. But fans know all too well that is easier said than done. 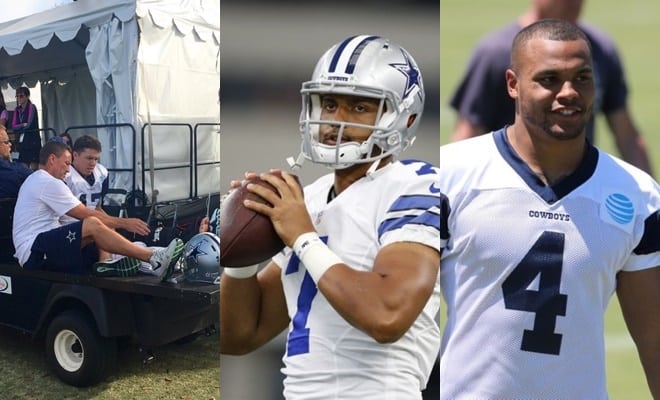 Jerry Jones has admitted to trying to “get cute” with the team’s quarterback situation last year, but it appears he hasn’t learned much from it. In case it wasn’t bad enough that the team still had Moore as the No. 2 (who did a terrible job last season), but now Jones is talking like the team is good with having rookie Dak Prescott or Jameil Showers backing up Romo.

“We’ve seen enough from them that they deserve this opportunity,” Jones said on ESPN 103.3, via the team’s website (PFT). “We’re going to see that, and so I don’t see bringing a quarterback in here that has to take reps away from these guys during the preseason. … These young quarterbacks are going to get it, and I’m not going to waste that time. That time is a precious commodity in the NFL to evaluate quarterbacks.”

It’s a nice thing to say, but is it the smart thing to do for a franchise that has become the definition of mediocrity in recent years, and claims to be worried about losing a generation of fans since it has been so long since the team’s been a winner?

Wouldn’t it have been smarter to try to bring in a better back-up? One that could actually keep the team on track if Romo goes down again?

Last season, the Cowboys went with Matt Cassel, Brandon Weeden, and Kellen Moore after Tony Romo broke his collarbone again. Weeden looked promising in relief of an injured Romo but did not play well in three starts. Matt Cassel got a much longer look, did win one game, but looked just as bad if not worse than Weeden.

Moore flashed some potential with a 435-yard game against the Washington Redskins to close the season but threw six interceptions and only four touchdowns in his three appearances.

Should the quarterback situation not change before the season begins, it will not be the first time the Cowboys entered a season with inexperienced reserves at quarterback. After cutting Quincy Carter during training camp in 2004, the team went with 40-yearold Vinny Testaverde at quarterback. His backups were former baseball player Drew Henson and Tony Romo (ESPN).

Maybe what Jerry Jones is doing is telling Prescott and Showers what they need to here in hopes they remain confident and play their best. If they workout—great. If not, there are a couple of teams with four or five quarterbacks on their rosters right now. They will have to cut someone eventually. Maybe when they do, Jones is planning on swooping in and picking him up.

However, that means the back-up will be someone another team didn’t think was good enough to be their back-up.