Posted on December 19, 2016 by Bryan Zarpentine 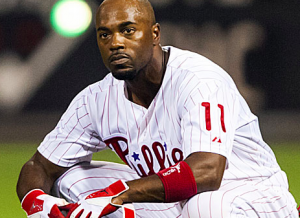 Countless players sign minor league contracts with major league clubs this time of year, but few are as noteworthy as three-time all-star and former MVP Jimmy Rollins. Last seen in June as a member of the Chicago White Sox, Rollins has reportedly signed a minor league deal with the San Francisco Giants. Rollins will receive an invitation to spring training with the Giants and will make up to $1 million if he makes the opening day roster and spends the entire season with the club. For the 38-year old Rollins, this could be his last chance at proving he can still play in the big leagues.

Rollins, of course, has already had a storied career. He broke into the big leagues late in the 2000 season with the Philadelphia Phillies and spent more than a decade in the City of Brotherly Love. During that time, he became one of the game’s brightest stars, winning four gold gloves, being selected to three-time all-star teams, and being named National League MVP in 2007. Rollins also helped the Phillies win a world championship in 2008.

After the 2014 season, Rollins waived his no-trade clause so he could be dealt to the Los Angeles Dodgers. Rollins spent most of 2015 as the every day shortstop in Los Angeles, only to lose his job late in the season to Corey Seager, who impressed late in 2015 on his way to being Rookie of the Year in 2016. During his year with the Dodgers, Rollins hit a modest .224, but did manage 13 home runs, helping him produce an OPS of .643.

After hitting the free agent market last winter, Rollins settled for a minor league deal with the Chicago White Sox. He won a job as the team’s every day shortstop out of spring training, but as the season wore on, Rollins continued to lose playing time to Tyler Saladino. After hitting just .221 with an OPS of .624 in 41 games, the White Sox designated Rollins for assignment so they could make room for top prospect Tim Anderson at shortstop. Rollins did not sign with another team the rest of the season.

Alas, this may be the last chance Rollins gets with a major league organization. If he’s able to make San Francisco’s opening day roster, Rollins will have a homecoming of sorts. He was born in Oakland and grew up in Alameda, California, which is just across the bay from San Francisco. It would certainly be a nice opportunity for Rollins to have his last hurrah in the majors happen so close to home.

If Rollins is going to make the Giants, it will be as a utility infielder, and he may have a realistic chance to do so. Unless San Francisco adds a third baseman before the season, Eduardo Nunez will take that spot, potentially leaving room for a backup infielder, especially one who can play shortstop. Ehire Adrianza will be his main competition, as he’s the only true shortstop on San Francisco’s roster outside of starter Brandon Crawford. Adrianza has spent parts of the last four seasons with the Giants and is a career .220 hitter in the big leagues.

The Giants have to be intrigued by the idea of adding a veteran like Rollins to their bench, and the fact that he’s from the area makes giving him a minor league contract an easy decision. Adrianza has never solidified his spot with the Giants, giving Rollins a fair shot at making the team. With Rollins in the mix, making perhaps his last stand, the battle for spots on San Francisco’s bench just became an interesting competition to watch during spring training.