John Gibbons Ejected for Third Time in One Week 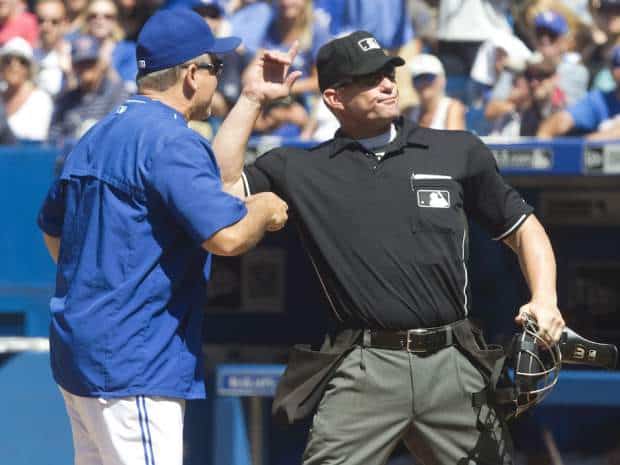 Toronto Blue Jays manager John Gibbons was ejected for the 3rd time this week, with the most recent time coming against the Minnesota Twins.

In almost any other profession, Toronto Blue Jays’ manager John Gibbons would be considered a part-time employee. Unlike his players, Gibbons is not sticking around for all nine innings, as he was ejected from Sunday’s game against the Minnesota Twins, his third ejection in the last week. A week that also saw Gibbons serving a three-game suspension, which prevented him from accumulating even more ejections.

Everything started last Sunday when Gibbons was ejected for arguing balls and strikes, only to re-emerge when the Blue Jays and Texas Rangers became engaged in a brawl. The Toronto skipper was slapped with a three-game suspension for coming back onto the field after being ejected. Gibbons was then tossed from Monday’s game before the suspension took effect starting Tuesday. He appeared to have learned his lesson after returning from the suspension, behaving himself on Friday and Saturday, but Gibbons just couldn’t get through the weekend without another ejection, his fourth of the season.

Sunday’s trouble began with reigning AL MVP Josh Donaldson at the plate. Minnesota’s Phil Hughes threw two pitches inside on Donaldson, one of which was actually behind him. Donaldson said something to umpire Mark Ripperger while Gibbons came charging out of the Toronto dugout, demanding that a warning be issued to Hughes. When his demands weren’t met, Gibbons found a way to get tossed once again by crew chief Joe West.

“The guy’s a strike-throwing machine. And then there’s a tight pitch, and then he throws behind him,” Gibbons said after the game. “I thought they were going to chuck him. But you never know what’s going to happen nowadays, if you want to know the truth. Whether it’s warnings, the guy gets thrown out or nothing. You never know.”

After Gibbons was sent off, this time not returning to the field, Toronto starter Marcus Stroman got some redemption for the inside pitches to Blue Jays hitters by hitting Kurt Suzuki the following half inning. The Blue Jays eventually won the game, giving them three wins in their last four after a five-game losing streak, but that didn’t stop the team from expressing frustration afterwards about what happened on the field or the fate of their manager.

“Major League Baseball has to do something about this,” said Donaldson. “They say they’re trying to protect players. They make a rule that says you can’t slide hard into second base. They make a rule to protect the catchers on slides into home. But when you throw a ball at somebody, nothing’s done about it. My manager comes out to ask what’s going on, and he gets ejected for it. That’s what happens.”

There’s no word on whether an excessive number of ejections in a short period of time will lead to any further punishment for Gibbons. However, if Gibbons can’t change his behavior and stop getting thrown out of the games, perhaps the Blue Jays will look into cutting him back to part-time. After all, they don’t want to pay him to manage all nine innings if he’s only going to stick around for five, right?