John Gibbons To Return As Blue Jays Manager in 2017 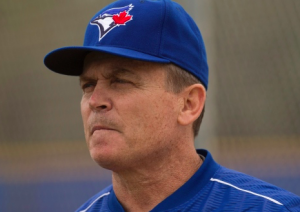 Despite getting knocked out of the playoffs in the ALCS for the second consecutive year, the Toronto Blue Jays have no intention of firing manager John Gibbons. Soon after losing Game 5 of the ALCS to the Cleveland Indians, who now advance to the World Series, multiple outlets reported that the Blue Jays intend to bring Gibbons back to manager the team next season. Team President Mark Shapiro also confirmed the news.

“There’s a level of consistency with him in approach that is unflappable and I think that translates into toughness,” Shapiro said after Wednesday’s loss. “He’s the same guy and in a role like this, when people tend to go with the wind and get so impacted by the emotion that flies all around us, that stability, that strength and that toughness from a leader is a real asset.

Gibbons is in his second stint with the Blue Jays. He managed in Toronto from 2004 to 2008 before being fired midseason and replaced by Cito Gaston, who also had multiple stints as Toronto’s manager. Gibbons then returned to the Blue Jays in 2013 and has now guided them to the ALCS in consecutive seasons.

Of course, while Gibbons will be back in 2017, the Blue Jays could look a lot different by the start of next season. Key offensive players Jose Bautista, Edwin Encarnacion, and Michael Saunders are set to hit free agency, as is starting pitcher R.A. Dickey and setup man Brett Cecil. On the surface, it doesn’t appear likely that either Bautista or Encarnacion will be re-signed by the Blue Jays, which will drastically alter the look of Toronto’s lineup, even with fellow sluggers Josh Donaldson and Troy Tulowitzki returning in 2017.

“I think they really helped put this team back on the map again, what they’ve accomplished,” Gibbons said about Bautista and Encarnacion after Wednesday’s loss. “And really both of them made their name here in Toronto. But baseball is still a business. It’s a game we play, but it’s still a big business and guys earn the right to try free agency, what have you. They both love it here, but it’s still a business.”

Losing several of their most important players to free agency could start to close Toronto’s window of opportunity to compete for a world championship. It’s unclear if the Blue Jays will be willing to spend the money required to bring back either Bautista or Encarnacion, nor is it clear how much they’ll be willing to spend to improve in other areas. Of course, even if the Blue Jays make positive additions this offseason, they still play in one of the most competitive divisions in baseball, a division that sent three teams to the postseason this year and could be even tougher next season.

With so many changes on the horizon, retaining Gibbons as the manager will at least provide some stability for the Blue Jays. “The one that is certain is our desire for him to continue to lead this organization on the field, and his desire is the same,” GM Ross Atkins said about Gibbons after Wednesday’s loss. Whatever the Blue Jays look like on the field next year, it’s important that the man in the dugout making decisions will be the same, as Gibbons will be back in Toronto in 2017, which should make the Blue Jays feel better about their chances for next season.