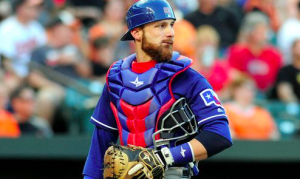 The Cleveland Indians spent Monday preparing for the 2016 World Series. Meanwhile, Texas Rangers catcher Jonathan Lucroy spent Monday not preparing to play in the World Series. Of course, as we all know, Lucroy had a chance to go to the Indians during the summer, but he ended up exercising his no-trade clause, insulting the city of Cleveland in the process. After vetoing that trade to the Indians, Lucroy ended up being traded to the Rangers. Even though the Rangers were swept in the NLDS, while the Indians won the pennant, Lucroy says he does not regret his decision to decline a trade to Cleveland.

“I’m good, man,” Lucroy told ESPN via text message when asked about the trade in retrospect. “There’s too much drama with all that. I’m not worried about it at all. It’s over with and in the past.”

To be fair, Lucroy outlined in detail the reasons why he chose to decline the trade to Cleveland soon after his move to Texas. He said that the decision to veto the trade to the Indians was all about business. Lucroy has a $5.5 million option for 2017, and based on his production this season, that makes him one of the biggest bargains in baseball.

He says that the Indians would not waive his option for next year, nor would they guarantee him the starting job in 2017 over Yan Gomes. Thus, Lucroy did not believe he would have the opportunity to fully showcase himself in 2017, his final season before hitting the free agent market.

That all makes sense from an economic standpoint, but from a baseball standpoint, it left many puzzled, and still does. At the trade deadline, the Indians looked far more capable of reaching the World Series than the Rangers, as Cleveland’s pitching was far superior than what Texas had. Despite some injuries, that pitching has, indeed, carried the Indians to the World Series, potentially depriving Lucroy a chance to be a part of a pennant-winning team.

Of course, while the people of Cleveland were upset at being spurned by Lucroy, the Indians as a team were fine about it then and they are more than fine not having Lucroy now. “Even though he plays my position, he’s definitely an upgrade,” backup catcher Chris Gimenez said at the time. “It would be ridiculous to say that he wasn’t. At the same time, we feel pretty strongly about the guys we have here, too. Unfortunately, he chose not to be a part of it. Hopefully, we can win the World Series and we’ll be laughing at him.”

Well, the Indians are just four wins away from being able to laugh at Lucroy, as Roberto Perez has stepped up as the team’s starting catcher. Perez has not contributed much offensively in the postseason, but he has been strong defensively and praised by Cleveland’s pitching staff for the job he’s done. “Roberto is below the radar, but he shouldn’t be,” say ALCS MVP Andrew Miller. “He’s incredible with his ability to receive the ball and call pitches, and he’s a better hitter than he gets credit for. What a special guy back there.”

If Lucroy is honest in saying that he doesn’t regret nixing the trade to Cleveland, then it appears the trade that didn’t happen has worked out perfectly for both sides. The Indians have reached the World Series, while Lucroy will be the starting catcher in Texas next season with one year before he hits free agency. However, it’s hard to think that if the Indians win the World Series, Lucroy won’t regret his choice just a little.