Jordan Zimmermann Roughed Up in Return from DL 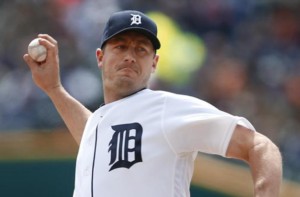 For the second time this season, Detroit Tigers starting pitcher Jordan Zimmermann had all kinds of struggles in his first game back from a stint on the DL. Zimmermann started against the Baltimore Orioles, but failed to record an out in the 2nd inning before being pulled from the game after allowing six runs on four hits, including three home runs. It was a disappointing performance for Zimmermann, who had high hopes of becoming a difference maker for the Tigers over the final few weeks of the season.

Zimmermann went to the DL in early July with a strained neck, but allowed six runs in 1.2 innings in his return from the DL in early August. Saturday’s start was Zimmermann’s first with the Tigers since that August start following another month on the DL with a lat issue. Zimmermann was undoubtedly frustrated with his performance, but insists he’s healthy.

“I was looking for something a little better than that,” he said after the game. “I felt good, that’s about the only positive I can take out of this. Physically, I felt pretty good. I just wasn’t locating with the fastball.” Zimmermann added that his outing, which was the shortest of his career, was “embarrassing,” although he did say “I feel back to my old self.”

Of course, even if Zimmermann felt like his old self, he did not look like the same pitcher who went 5-0 with a 0.55 ERA over his five starts in April. Zimmermann admitted that he may have rushed his comeback from injury earlier this year, but says he did not do the same this time around. This time around, Zimmermann made three minor league rehab starts before returning to the Tigers, and while he says his velocity was not where he would have liked, he felt he was ready to go.

“I’ve never been told that he wasn’t 100 percent,” Tigers manager Brad Ausmus said afterwards. “He pitched his rehab, and after his last rehab start he said he felt really good. That’s why we went forward.”

“I’ve never been through anything like this in my career,” Zimmermann said, lamenting his injury issues this season. “Obviously this is the first year where I’ve had some trouble and we couldn’t really pinpoint what it was and found some muscles that were tight and kind of restricting me a little bit and causing the neck and stuff. It’s been a grind all year and I’m doing all I can to get back to what I was the first couple months.”

Ausmus and the Tigers must now decide if Zimmermann will make his next start, which is scheduled for Thursday against the Minnesota Twins. If Zimmermann doesn’t make the start, Mike Pelfrey, who was just moved to the bullpen, is an option, as is Buck Farmer, who pitched three innings in relief Saturday night. The issue is complicated further by Detroit’s concern over the innings count of rookie Michael Fulmer, who may have to miss a start or two down the stretch.

The loss Saturday put the Tigers a game behind the Orioles for the second wild card spot heading into the rubber game between the two teams on Sunday. Zimmermann did not provide the Tigers with the type of boost they were hoping for, and if he can’t improve upon that, assuming he gets another start, the task of reaching the postseason for the Tigers will be far more difficult.