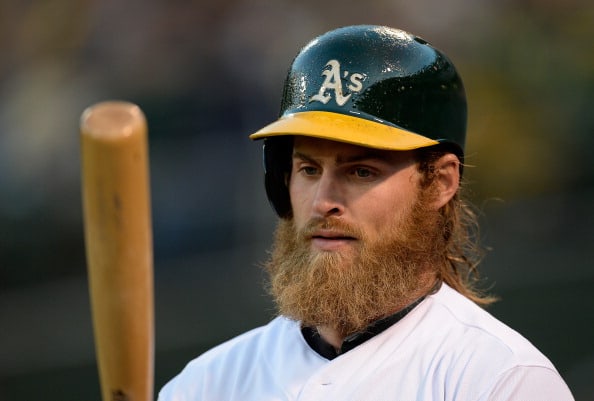 An already disappointing season for the Oakland Athletics took another downward turn Thursday night, as outfielder Josh Reddick broke his thumb. Reddick fractured his left thumb sliding head first into second base while stealing the bag during Thursday’s loss to the New York Yankees. Initial reports are that Reddick will miss four to six weeks, although he will know more after seeing a hand specialist. Reddick will give Oakland an even dozen players on the DL, continuing the team’s season-long battle with injuries.

Reddick has undoubtedly been one of Oakland’s best hitters this season, putting up a line of .322/.392/.466 with five home runs and six doubles. He’s also been hot of late, hitting .468 in his last 14 games. Even without all the other injuries the A’s have endured this season, Reddick may have been the player Oakland could least afford to lose for an extended period of time.

That sentiment was reflected in manager Bob Melvin’s post-game comments. “He hits third for us every day. He’s one of the better players in the league,” Melvin lamented. “That’s a pretty significant guy to lose.”

Reddick also expressed his frustration after the game, saying, “I feel like I was having a great year and cemented myself as the three-hole hitter of this team.”

So where do the A’s go from here? Oakland’s outfield depth has already taken a hit with Mark Canha and Sam Fuld both out for the season with hip and shoulder injuries, respectively. Coco Crisp has been the team’s fourth outfielder this season, but he’s hitting just .235 and has never played right field in a big league game. Chris Coghlan has some experience in right field, but he also has a .165 average. Moving Coghlan to right field would also force Tyler Ladendorf, who’s 0 for 13 this season, to play second base every day.

None of those options are particularly appealing for the A’s, and in the case of Crisp, regular playing time could exercise a $13 million vesting option, which is something the team would be wise to avoid. The A’s don’t have many appealing options in the minors, with Andrew Lambo and Jake Smolinski being possibilities to get called up, but neither has been particularly impressive in triple-A this year.

Outside of simply replacing Reddick in right field, Oakland has to find a way to replace his production in the lineup. Shortstop Marcus Semien and left fielder Khris Davis have provided plenty of power this year, but neither is hitting for a high average like Reddick was. Third baseman Danny Valencia has been the team’s best hitter outside of Reddick, but he’s unlikely to keep up his current pace, and he’s going to need help around him.

With Reddick now out for the foreseeable future, the A’s will need the likes of Billy Butler, Yonder Alonso, and Stephen Vogt to shake off slow starts to the season and start producing. Oakland already finds itself four games under .500 and five games out of first place in the AL West. If the A’s hope to tread water until Reddick and some of their other injured players return, they will need to find production from several players who have struggled thus far in 2016. Otherwise, the injury to Reddick may prove to be one too many for the A’s to overcome.